El Chicano will screen at the Maryland Theater located at 27 S. Potomac Suite 201 Hagerstown, MD at 7:00 PM. The VIP party will begin at Bulls and Bears 38 S. Potomac at 5:30 pm with the red carpet photos taking place from 6:00-6: 30 pm. Tickets are on sale now at http://www.marylandiff.com. 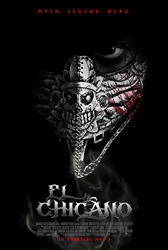 El Chicano is a symbolic film based on director Ben Hernandez Bray's life whose brother was murdered by a gang. The all-Latino cast delivers compelling performances that depict El Chicano's adventures as he fights against nefarious villains in the barrio.

Washington, DC March 12, 2019- El Chicano, a Latino-inspired superhero film starring Raul Castillo and George Lopez will kick off the three day Maryland International Film Festival-Hagerstown March 29, 2019, at 7:00 pm. Ben Hernandez Bray said, "We are excited to screen our film for the Maryland audience. When I visited the festival a couple of years ago, we announced that we were going to make El Chicano. It's humbling to see it come together and on the big screen."

El Chicano will screen at the Maryland Theater located at 27 S. Potomac Street Hagerstown, MD at 7:00 PM. The VIP party will begin at Bulls and Bears 38 S. Potomac at 5:30 pm with the red carpet photos taking place from 6:00-6: 30 pm. Tickets are on sale now at http://www.marylandiff.com.

Executive Director, Tracie Hovey said, "We are always thrilled to see filmmakers make their dreams come true when their movies are completed and picked up for distribution. El Chicano will be on screens across the U.S. beginning May 3. Ben Hernandez Bray is a fantastic talent and has demonstrated the grit that it takes to survive life's challenges, rise above and create a better life for himself. He is a true inspiration."

Briarcliff Entertainment has acquired U.S. rights to El Chicano and has planned to open in 600-800 theaters nationwide on May 3, 2019. El Chicano is the second film produced by WarParty, the production company owned by Joe Carnahan and Frank Grillo.

Ben Bray began his career in boxing. Those boxing skills led him into the stunt industry where he became one of the very few successful Latino stuntmen in Hollywood. Eventually, he became one of the top action stunt coordinators and second unit directors, working with "Smokin Aces" Joe Carnahan and "Silver Linings Playbook" David O Russell. After twenty-five plus years in the industry and over one hundred fifty film and television credits, Bray decided to try his skills as a director. He has found his passion directing television with Katie Heigl's TV series "State of Affairs" for NBC/Universal, episodes for Fox/Bruckheimer, CW/Greg Berlanti and ABC/Freeform. El Chicano is Bray's feature film directorial debut.

The 8th Annual Maryland International Film Festival-Hagerstown received more than 400 submissions, and the judges announced that over 150 films were selected. Opening night Friday, March 29th is taking place at the Historic Maryland Theatre. Other venues on Friday, Saturday, and Sunday, March 30 and 31st include the Grand Piano Building, Alice Virginia & David E. Fletcher Library, the University System of Maryland Hagerstown, and the Chamber of Commerce. The after parties will be hosted at Bulls and Bears and 28 South. All films on Friday before 5 pm are free to the public.