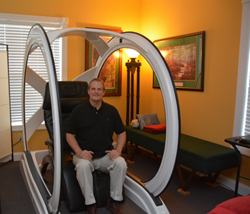 Dr. Dirk Simons of Simons Chiropractic tries out his new installation of the Magneceutical Health, Magnesphere in his Matthews Clinic

The Magnesphere has provided me with a relaxing therapy that also helps control my Parkinson's symptoms. I was getting so many benefits from the device, I bought my own home unit. Richard London Author Speaker

Doctor of Chiropractic, Dirk Simons and his Partner, Diane Brinson invested a significant amount of time energy and capital in improving the Simons Chiropractic practice in the last six months.

"We needed a new web site and some digital marketing help. said Dirk Simons, owner. We found that service right on our adjustment table. It was Chuck Robbins who had been a patient of ours for over 25 years." he continued.

Robbins and his company aro marketing began working on the site in the fall of 2014. http://DirkSimons.com was fully functional in January 2015.

A major component of the new web site features Simons' recently installed Magnesphere. It is a leading edge magnetic resonance therapy device that requires no drugs, no surgery and no pain. The equipment is manufactured by Magneceutical Health and the unit in the Simons practice is one of only 50 machines installed in North America. Dr. Simons requires an appointment for the Magnesphere but his Chiropractic practice is walk in. For a free one time treatment visit the new web site here http://DirkSimons.com

Richard London, A Charlotte author and speaker was one of the first people to use the Magnesphere said,

"Parkinson's Disease has numerous symptoms and I battle them daily. The Magnesphere has provided me with a relaxing therapy that also helps control those symptoms." London Continued, "I was getting so many benefits from the device, I bought my own home unit."
Find out more about London at http://ahandbookforlife.com

About Diane Brinson
Diane Brinson has a BA in Economics and a BA in Business Management from North Carolina State University as well as a Masters in Public Administration from University of North Carolina – Charlotte. She has helped out at the practice for almost eight years and specializes in Financial and Operations Management, Contracts, Strategic Planning, Marketing and Communications. Diane has over 25 years of Financial and Project Management experience.

At Simons Chiropractic in Matthews, They use the best combination of Spinal Adjustment and Therapy Devices

Diane Brinson and Dr. Dirk Simons talk over the schedule for the day

Richard London at a recent conference preparing to autograph his materials