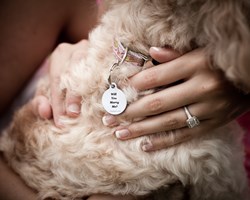 Dog Tag Art announces new wedding-themed dog tags inspired by a heartfelt, creative proposal story from a customer who popped the question to his bride-to-be with a custom Dog Tag Art dog tag.

Gerry Floyd (27) and Heather Jones (24) of Raleigh, North Carolina, got engaged in a cabin in the mountains of Asheville, North Carolina, on the eve of their five-year anniversary. But this isn't your standard cabin-in-the-woods proposal story. Yes, there was a romantic dinner in town. Yes, there was a night sky studded with stars back at the cabin. Of course Gerry had some jitters before popping the question to Heather. But he had a special accomplice and a secret weapon: Sydney, the couple's one and a half year old Cockapoo, equipped with custom dog tags he'd ordered online from Dog Tag Art.

The last tag, the real showstopper, had four little words in a sweet cursive script.

Will you marry me?

Five years leading up to that night, the young couple met while in college. Today, Heather is a civil engineer, and Gerry is a tax analyst and getting his masters in Accounting. Sydney, their adorable Cockapoo, a Cocker Spaniel poodle mix, was a gift from Gerry to Heather when she graduated from college. They picked her out together. Sydney gets her name from a six-week stint Heather spent in Australia, the longest the couple had ever been apart, although the separation quickly cemented their love.

“We were planning a trip for our five-year dating anniversary and we found a pet-friendly cabin in Asheville, North Carolina, where Sydney could come and join in on the fun,” said Heather.

On the last night of the trip, which was the exact day of their five-year anniversary, the couple went downtown for dinner and drinks. Afterwards, they returned to the cabin, and Gerry executed his plan. He took Sydney outside and walked her over to his truck. Acting quickly, so Heather wouldn't get suspicious, he put a new collar on Sydney with three custom dog tags he'd ordered from Dog Tag Art. He slipped the forth tag in his pocket, along with the engagement ring.

“As soon as Gerry brought Sydney inside, I noticed she was wearing a new collar. I picked her up and saw that there were three dog tags hanging from the collar. The tags had numerous adjectives that Gerry used to describe me,” said Heather.

“I thought this was a sweet little anniversary gift, but Gerry told me that one of the tags must have been missing. He got the last tag out of his pocket and handed it to me. I read it, and it said, 'Will you marry me?' Of course, the tears began to flow, and the next thing I knew he was down on one knee holding the ring out for me.”

“After many tears and the initial shock wearing off, I finally managed to say "YES!". It was such a perfect proposal for us. Sydney is such a big part of our lives and I couldn't have thought of a better way than to have her involved in it,” Heather said.

Gerry, of course, gets major points for masterminding such a creative proposal. At the time, he didn't realize that Dog Tag Art is based in Asheville, North Carolina, where he ended up proposing to his bride.

“He chose Dog Tag Art because he likes to buy everything online,” said Heather. “He's not a really big shopper, and they provided everything he needed and had great customer service.”

And how does Sydney feel about all of this?

“She was thrilled to help and is so excited for her parents to get hitched!” laughed Heather.

“I never thought that I would love an eighteen pound dog as much as I do but I couldn't live without her or her wonderful mom!” added Gerry.

Heather and Gerry will wed in April, in Raleigh, North Carolina.

Dog Tag Art makes high-quality personalized pet ID tags featuring a sturdy recycled steel core and permanent graphics. Customers can go to dogtagart.com to design their own one-of-a-kind tags using custom text, personal photos or imagery, or select from hundreds of artist-submitted tag designs. Like Heather and Gerry's story, Dog Tag Art tags can be used to creatively commemorate special occasions, including engagements, weddings, anniversaries, birthdays, reunions, and other celebrations. Dog Tag Art has been featured on Regis and Kelly, as well as in The New York Post, Dog Fancy, and in several other publications.