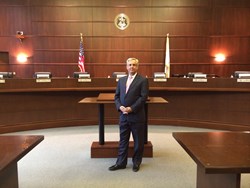 This is a clash between two critical societal values, the public’s right to know and the individual’s right to privacy.

“This is a clash between two critical societal values, the public’s right to know and the individual’s right to privacy,” says Ramsell.

The Illinois Eavesdropping Act, which bans the audio recording of conversations without the consent of all parties, has been under scrutiny for several years. Illinois legislative efforts to revise the law have been ineffective.

“The problem we have in society is the law sometimes swings too far one way or the other, and it becomes problematic, “says Ramsell.

In 2013, Ramsell was selected for membership to the Top 100 Trial Lawyers organization. The organization recognizes attorneys for their knowledge, skill, and success held by only the finest lawyers in the United States. He was also named a 2014 Illinois Super Lawyer by Chicago Magazine, which marks his 8th Super Lawyer designation since 2005.

The success of Ramsell & Associates, LLC in Wheaton, Illinois is well known internationally and within the legal community. Ramsell’s firm has defended over 13,000 clients since 1986. You can take advantage of their extensive criminal and trial experience by calling 1-800-DIAL-DUI for a FREE case review.