A new study reportedly discovered that driving with a hangover is just as dangerous as driving drunk. Stisim Drive commented that could be proven correct via a driving simulator system. 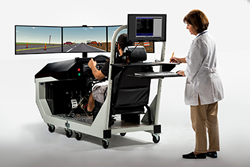 ...out of all the driving simulators, Stisim Drive asserted that its own are the best. It reasoned that it's because they are cost-effective and could even be used for research and rehabilitation of patients.

Drunk driving is a very common cause of road accidents. And according to a report from fox59.com, a study discovered that getting behind the wheel while still hangover is just as dangerous. In response to it, Stisim Drive backed the assessment and stated that a driving simulator could prove it.

The report was published on May 07, 2014. And based on it, being in a hangover state slows down a person's reaction. It detailed that it particularly impairs the individual's thought processes making him respond as if he is drunk.

In addition to the danger it presents, driving while hangover could also land someone a charge, the post stated. It elaborated that if ever an officer notices someone on the wheel with a hangover, he could be issued a violation ticket for “driving while impaired.”

“New research shows driving with a hangover can be just as dangerous as driving drunk.

Physicians and the California Highway Patrol say even though there’s no more booze in your system, your actions are still strongly impaired.”

In driving, a moment of inattentiveness and a delayed response caused by a hangover could indeed lead to a major accident, commented Stisim Drive. And as it asserted, a driving simulator could prove that true. Additionally, it said that training with it could help prevent such untoward incidents.

As it explained, driving simulation systems copy real-life road scenes, even a scenario wherein the driver is drunk or hangover. A drive test with that scene, it stated, could show its danger and its possible results that could cause injuries or worse, death.

That, said Stisim Drive, could make it known to the public the harm that driving drunk or hangover could bring. But that's not just what a driving simulator could do. It stated that could also improve a person's driving skill as anyone could train or practice on it in different scenes.

Nonetheless, out of all the driving simulators, Stisim Drive asserted that its own are the best. It reasoned that it's because they are cost-effective and could even be used for research and rehabilitation of patients.

Additionally, it cited that their driving simulator software - Stisim Drive Software - is open, programmable and customizable. It stated that it could fit anyone's need.

To learn more about them, readers could visit the company's website at stisimdrive.com.