Peter Drucker lamented the lack of attention given to family businesses in many management schools. One of Drucker's former students and his spouse have given a gift to establish an award honoring the world’s most exemplary business-owning families. 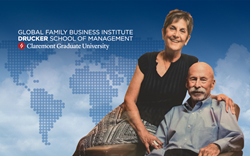 SHINING A LIGHT ON FAMILY BUSINESS EXCELLENCE: Peter S. Sealey and his wife Elizabeth (pictured) have given $1 million to establish a new annual award.

"I know of Pete’s personal relationship with and high regard for Peter Drucker, and I think Peter Drucker must be smiling approvingly as we move forward faster, thanks to Pete.” --- Drucker School Professor Vijay Sathe

Sealey has deep experience in the corporate world, including 20 years at The Coca-Cola Company, where he held a variety of key positions, including chief marketing officer. (He was responsible for the 1993 global launch of the “Always Coca-Cola” advertising campaign and its famous Polar Bear commercials.) He also served as president of marketing and distribution at Columbia Pictures in the late 1980s, during which his releases included “Ghostbusters,” “The Karate Kid,” and “Tootsie.”

Sealey has seen CGU from both sides of the classroom, earning two graduate degrees as well as teaching marketing at the Drucker School as an adjunct professor.

“Peter Sealey represents so much of what is good about Drucker and CGU,” said David Sprott, dean of the Drucker School. “He has had an exemplary career and paid it forward by returning to campus to share his expertise with a new generation of students. His gift to the Global Family Business Institute embodies the Drucker School’s commitment to make the world a better place and will firmly position the Institute as a leader in sustaining family business.”

Founded in 2018, the Global Family Business Institute is committed to serving multi-generational family businesses in practical and academic ways. The Institute provides thought leadership and convenes educational sessions to assist with the perpetuation of the business and the preservation of the family unit.

“The Sealey endowment is a great opportunity for the Drucker School Global Family Business Institute to celebrate, highlight, and learn from some of the world’s most influential business-owning families,” said David Specht, the Institute’s director.

C.S. & D.J. Davidson Chair and Professor of Management Vijay Sathe has known Sealey since he was a student at the Drucker School 30 years ago. Sathe said he was elated, but not surprised by Sealey’s transformational gift.

“Pete has been a consistently generous supporter of the work of the Drucker School, and this great gift is so timely as the Global Family Business Institute accelerates toward delivering on its mission and beyond," Sathe said. "I know of Pete’s personal relationship with and high regard for Peter Drucker, and I think Peter Drucker must be smiling approvingly as we move forward faster, thanks to Pete.”

About CGU and the Drucker School