The Drucker Institute has announced that HopeLab is the winner of the 2014 Peter F. Drucker Award for Nonprofit Innovation. 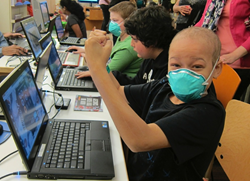 Like Peter Drucker, we see changes in technology and society as opportunities, not threats.

The Drucker Institute has announced that HopeLab is the winner of the 2014 Peter F. Drucker Award for Nonprofit Innovation.

The judges recognized HopeLab for its pioneering work in creating products that help people tap into their innate resilience and respond to life’s adversity in healthy ways.

The organization will be honored with a $100,000 prize, an amount made possible in large part through the generosity of The Coca-Cola Foundation.

“HopeLab’s Resilience Initiative is a powerful example of Peter Drucker’s insight that true technological innovation often ‘demands not one kind of knowledge but many,’” said Rick Wartzman, the Drucker Institute’s executive director. “HopeLab combines promising technology, research into psychology and biology, and design principles based on direct engagement with its target audience—itself a very Drucker-like practice.

“HopeLab,” Wartzman added, “was a true standout among a very, very impressive field of finalists.”

In all, the Drucker Institute received 687 applications for the Drucker Award this year from nonprofits in 46 states and the District of Columbia.

The judges noted that they were particularly impressed with the way that HopeLab met a key criteria for the award—showing how its programming makes a real difference in the lives of the people it serves.

For example, its Re-Mission video games for adolescents and young adults with cancer address the problem of poor treatment adherence by putting players inside the body to battle the disease with weapons like chemotherapy, antibiotics and the body’s natural defenses. Working with hospitals and clinics, HopeLab has distributed more than 210,000 copies of the game in 81 countries. And research published in the medical journal Pediatrics found that playing Re-Mission significantly improved key behavioral and psychological factors associated with successful cancer treatment. In fact, in the largest randomized controlled study of a video-game intervention ever conducted, participants who were given Re-Mission took their chemotherapy and antibiotics more consistently, showed faster acquisition of cancer-related knowledge and increased their self-efficacy.

Building on the success of this founding project, HopeLab has since launched the Re-Mission 2 online games and mobile app, the Zamzee program to boost physical activity and combat sedentary behavior in children, and a number of other mobile apps and social technologies that support resilience and improve health.

“Like Peter Drucker, we see changes in technology and society as opportunities, not threats,” said Pat Christen, president and CEO of HopeLab. “Our work shows that specially designed games and social technologies can play a powerful role in supporting human resilience in the face of adversity, whether it be a cancer diagnosis or the challenges and stresses of everyday life. Indeed, cultivating resilience catalyzes new dimensions of performance in individuals, communities and the systems that organize our world. Combining scientific rigor and user-centered design—listening deeply to the people we serve—is an essential hallmark of our own approach. We are honored and humbled by the recognition of the Drucker Institute and the generous support that comes with this award. We find inspiration in Peter Drucker’s great legacy as we continue our mission to harness the power and appeal of technology to improve people’s health and well-being.”

The Drucker Award has been given annually since 1991 to recognize existing programs that meet Peter Drucker’s definition of innovation—“change that creates a new dimension of performance.” The cash prize is designed to celebrate, inspire and further the work of innovative social-sector organizations based in the United States. Thanks to funding from The Coca-Cola Foundation, the first-place award will remain at $100,000 through at least 2015.

Wartzman pointed out that the Drucker Award application has itself become a way to teach nonprofits about Peter Drucker’s key principles of innovation. A survey of those completing this year’s application found that 97% said they now had a better understanding of how their program was innovative, and, most significantly, 87% said the application had prompted them to explore additional opportunities for innovation in their work.

About the Drucker Institute
The Drucker Institute is a social enterprise based at Claremont Graduate University. Our mission is strengthening organizations to strengthen society. Our programming—for the corporate, nonprofit and public sectors—is built on a foundation of YESTERDAY/TODAY/MONDAY* “Yesterday” refers to the fact that our work is grounded in Peter Drucker’s timeless wisdom. “Today” speaks to the urgency that we know organizational leaders feel to successfully meet their greatest challenges and opportunities. And “Monday” points to our proven ability to help executives move quickly from ideas to action to results, just as Drucker urged his own consulting clients: “Don’t tell me you had a wonderful meeting with me. Tell me what you’re going to do on Monday that’s different.” For more, visit http://www.druckerinstitute.com.

About Claremont Graduate University
Founded in 1925, Claremont Graduate University is one of the top graduate schools in the United States. Our five academic schools conduct leading-edge research and award masters and doctoral degrees in 22 disciplines. Because the world’s problems are not simple or easily defined, diverse faculty and students research and study across the traditional discipline boundaries to create new and practical solutions for the major problems plaguing our world. A Southern California-based graduate school devoted entirely to graduate research and study, CGU boasts a low student-to-faculty ratio.