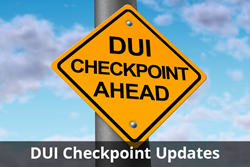 LAPD is targeting drunk drivers in the Los Angeles area with DUI checkpoints this weekend. Saturation checkpoints such as these are designed to deploy large numbers of law enforcement personnel during high-risk periods to stop suspected impaired drivers and to monitor for other potential violations, such as speeding and aggressive driving. Thousands of DUI-related collisions occur annually in Los Angeles and are responsible for hundreds of injuries and dozens of fatalities. Checkpoints can be one tool to reduce the numbers of collisions and keep roadways safer.

Checkpoints may be located at the following locations:

Drunk driving has serious penalties in California. A first conviction for a DWI without injury or death could result in hundreds of dollars in fines and penalty assessments and a jail sentence as well as a license restriction that allows you to only drive to and from work and an appropriate alcohol treatment program. This restriction begins only after the suspension is lifted. According to California Vehicle Code 23154 (a), it is illegal for those who are on probation for an alcohol-related offense to operate a motor vehicle while under the influence of alcohol.

Other consequences can include:

The consequences for a violation of California Vehicle Code 23154 (a) can be even higher, including costs of up to $10,000 or more, lost insurance and the loss of your license.

The Los Angeles Police Department and the City of Los Angeles are committed to ending all traffic-related collision deaths by 2025 by supporting Vision Zero. DUI checkpoints will play an important role in this goal and are funded by a grant through the California Office of Traffic Safety and the National Highway Traffic Safety Administration.

Because DWIs can have serious consequences for drivers personally, professionally and financially, drivers are encouraged to seek legal counsel as soon as possible after a stop. Mr. Ticket offers legal consultations and assistance for drivers who have been charged with drunk driving and can help them determine their best next steps.

For more information about DUI checkpoints times and locations, visit the website.