Duncan Shelley Debuts As a Published Writer With an Intriguing Book

‘Murderers of the Mind’ tells of a man’s betrayal of the lord’s of civilization in order to serve humanity better. 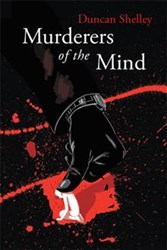 Civilization has been controlled by the invisible operation of a central authority since the dawn of history. No one has ever become a traitor from this circle until now. Someone betrays them to serve humanity. This is the exciting premise of author Duncan Shelley’s new book. With an extensive research to the many questions that interests him regarding the possible conspiracies surrounding international politics and world economy, Shelley came up with a fast-paced and intriguing tale that will prove to readers that the world is not what they have so far believed it to be.

“Murderers Of The Mind” reveals the secret societies that control the world in an invisible manner, and the widespread war against them, as a result of one traitor’s actions. After Julius Andan, a world renowned psychologist goes missing, the society and the circle he left goes berserk for he knows many secrets of the world’s powers that should never be leaked. As Andan seeks help and refuge in the care of a team of trained assassins, he works on uncovering the many facets of the conspiracy he himself wants to fully understand.

With the lords and manipulators of civilizations behind him and the theory he seeks to prove true in front of him, will Julius Andan be able to live through to see people and the world discover the answers he too seeks, unharmed? Follow as Shelley writes with great care, at the highest possible professional standard while he presents a worldview that is close to reality, with scenes more or less based on the events humanity experiences in this present society.

Based mainly on the financial crises worldwide and in the United States, “Murderers Of The Mind” presents a logical answer as to why the world is the way it is, giving an answer that is both realistic and believable.

About the Author
Duncan Shelley has been writing ever since he was a child, for 30 years. Since the summer of 2000, writing has been his main profession. He has been teaching the fundamentals of writing for nine years, so far with over 320 students. He has been doing sports for 16 years; he was a boxer at the most prominent Hungarian club, learned numerous martial art styles — jeet kune do, kenjutsu — target shooting at the Hungarian Defense Forces, and recently he has been doing street workout. Currently he is enrolled in school, studying screenplay writing and directing.