DUNMORE’s work with NASA and its partners is highlighted in NASA's 2016 Spinoff publication. DUNMORE developed specialized tapes and reflective insulation for use in space that have spun off into commercial applications. 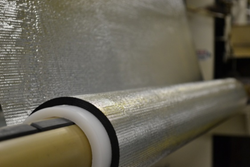 DUNMORE specialty film used in the construction of aircraft insulation.

“Just about everything we’ve built over the last 20 years has had, in some form, a DUNMORE product on it." - Mark Duran, Thermal Blanket Engineer at Jet Propulsion Laboratory

DUNMORE Corporation is recognized in the 2016 edition of NASA's Spinoff magazine for its ability to develop products that protect and allow spacecraft and satellites to operate in the rigorous environment of space. DUNMORE, a leading supplier of coated, laminated, and metalized films for more than 40 years, has served the aerospace industry since 1985, supporting scores of National Aeronautics and Space Administration (NASA) space missions as well those of the European Space Agency and others around the world. DUNMORE has progressively solved critical overheating and insulating problems with continuous advances in the technology and manufacturing of multi-layer insulation films, tapes and electrostatic dissipative films.

The NASA Spinoff publication explores technologies originally developed for space missions, and adapted for applications right here on earth. These technologies are expansive, from radial tires to baby formula, and in DUNMORE’s case, Spinoff technologies make up a large part of the company's product offerings today. Aircraft materials (http://www.dunmore.com/products/aircraft.html) and reflective insulation (http://www.dunmore.com/products/radiant-barrier-insulation.html) are product examples of the company's collaboration with space exploration. These cooperative developments have fundamentally changed DUNMORE into an industry leader in handling specialty films, foils and fabrics for technical applications.

NASA* has often turned to DUNMORE when it faced particularly difficult problems. In turn, the company has eagerly studied each new challenge and developed a solution. For instance, insulating materials must reflect unwanted heat away from a space vehicle while allowing a portion of that heat to pass into the vehicle, keeping it warm enough to operate reliably. In one particularly difficult case, according to Neil Gillespie, Vice President of Technology at DUNMORE, “We experimented with a lot of different material configurations and coatings to ensure we were developing products with optimal characteristics without adding too much weight. It involved a great deal of trial and error and ultimately produced a highly efficient family of products.”

Research and development has been a cornerstone of the company since its founding. Today, R&D is the second largest segment of the company, surpassed only by its ISO and OSHA VPP Star certified manufacturing division. DUNMORE’s passion in developing solutions to seemingly impossible challenges has elevated the company to the highest possible supplier status at the leading Aircraft and Spacecraft companies. The Spinoff article applauds DUNMORE for its dedication to creative problem solving and its commitment to quality and reliability. According to Mark Duran, Thermal Blanket Engineer at Jet Propulsion Laboratory, “Just about everything we’ve built over the last 20 years has had, in some form, a DUNMORE product on it."