DuraMAX Powered By RelaDyne Continues Partnership With Andretti Autosport For NO. 28 DHL Honda

Ryan Hunter-Reay to continue running with DuraMAX Powered by RelaDyne on No. 28 DHL Honda for four events including the Grand Prix of Indianapolis and 103rd Indianapolis 500-Mile Race. 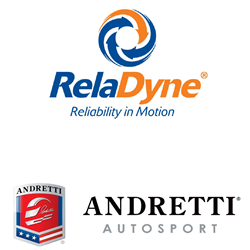 "We are excited to see the No. 28 Indy car back in action with the emblazoned DuraMAX logo during the IndyCar Series season."

RelaDyne, a Cincinnati-based national lubricants and fuel distributor, will continue its partnership with Andretti Autosport for the third consecutive season for the 2019 NTT IndyCar Series season. The red and blue colors of RelaDyne’s automotive brand, DuraMAX, will be proudly displayed on the No. 28 DHL Honda, driven by 2014 Indianapolis 500 winner Ryan Hunter-Reay, as the team heads into Sunday’s Firestone Grand Prix of St. Petersburg.

“RelaDyne’s continued relationship with Andretti Autosport in 2019 demonstrates the value we’ve experienced being a sponsor of the racing community,” said RelaDyne President and CEO, Larry Stoddard. “We are excited to see the No. 28 Indy car back in action with the emblazoned DuraMAX logo during the IndyCar Series season.”

“We are excited to continue our DuraMAX partnership for the 2019 INDYCAR Series in support of Ryan Hunter-Reay,” said Andretti Autosport Chief Marketing Officer, Doug Bresnahan. “With Hunter-Reay’s winning record, we’re confident we can get RelaDyne and the DuraMAX brand in victory lane at the Indianapolis Motor Speedway.”

DuraMAX, powered by RelaDyne, made its first appearance with Andretti Autosport in 2017 as part of the team’s Indy Lights Presented by Cooper Tire effort as primary sponsor for Nico Jamin, at both the Indianapolis Grand Prix and Freedom 100. This season, DuraMAX returns as the repeat sponsor for four IndyCar events for DHL driver, Ryan Hunter-Reay including: Grand Prix of St. Petersburg, INDYCAR Grand Prix, Indianapolis 500, and Mid-Ohio Sports Car.

“As RelaDyne embraces the newest lubrication technology in the market, DuraMAX continues to be one of the most advanced and fastest growing engine oils in the United States. Our third season with Andretti Autosport solidifies our commitment to making DuraMAX the preferred brand in the marketplace,” shared Dan Oehler, Vice President of Sales & Marketing of RelaDyne. “This partnership exemplifies the high-speed commitment between RelaDyne, DuraMAX, and Andretti [Autosport] toward Trusted Technology and Proven Performance.”

In addition to DuraMAX automotive products, RelaDyne provides commercial and industrial lubricants and industrial reliability services to more than 13,000 clients based on the commitment to leverage industry expertise to provide each customer value, dependable service, and effective solutions. With qualities and products that align with Andretti Autosport and the team’s success on track, this partnership combines a high-quality brand into a high-performance motorsport.