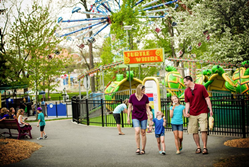 Dutch Wonderland has been awarded the 2019 Amusement Today Golden Ticket for Best Family Park, a category recognizing a park that “exemplifies the highest level of quality experiences, warmth and character and a wide variety of rides all within a well-maintained family-friendly park” according to the amusement industry publication. Dutch Wonderland has previously been voted among the top 5 in the category of Best Children’s Park; this is the first Golden Ticket win for the park.

Golden Tickets are awarded based on votes from an international panel of amusement park enthusiasts. In addition to Best Family Park, categories include Best New Roller Coaster, Best Water Park Ride, and others.

“A Golden Ticket is one of the highest honors in the amusement park industry, so we are humbled to receive this award,” said Laura Charles, Dutch Wonderland General Manager. “While our attractions and atmosphere are major parts of the Dutch Wonderland experience, I want to particularly thank our team members. It is through their dedication, enthusiasm, and guest-focused commitment that we create the magical memories Dutch Wonderland is known for. It’s so rewarding to know we’ve made a lasting impact on so many families!”

Envisioned by founder Earl Clark, Dutch Wonderland first opened its doors in 1963 with its famous castle entrance and four rides. Since then, the park has expanded to include more than 35 rides, shows and attractions, most recently opening Merlin’s Mayhem, the first S&S Worldwide family suspended coaster, in 2018. Dutch Wonderland additionally runs popular seasonal events including Happy Hauntings and Dutch Winter Wonderland, the latter voted as one of the 10 best holiday events in the country in a 2018 USA Today poll.

“BEST FAMILY PARK is a new category for the Golden Ticket Awards this year. The results have been determined by various aspects of the amusement industry — experienced park fans, amusement ride suppliers and industry journalists. These are people who know their stuff,” said Tim Baldwin, Golden Ticket Awards Communications Coordinator, Amusement Today. “Dutch Wonderland is being recognized for its great environment for families. Rides that parents can ride with their kids, shows that resonate with all ages, and a variety of experiences that have thrills geared toward family entertainment rather than the thrill-seeking daredevil… these are the things that make up a great day of family memories. Dutch Wonderland has that winning formula that is making an impression on its audience.”

About Dutch Wonderland and Palace Entertainment:
Dutch Wonderland, located in the heart of Pennsylvania Dutch Country, is a kingdom for kids and the perfect place for family fun. The theme park features over 35 rides, attractions, & shows, as well as camping accommodations at Old Mill Stream Campground, perfect for out of town guests. Dutch Wonderland is owned and operated by Palace Entertainment, one of the leading US leisure park operators. The company operates Kennywood in Pennsylvania, Splish Splash waterpark in New York, Raging Waters in California, and many other family favorite destinations across ten states and two countries. Palace Entertainment greets millions of visitors annually and invites them to enjoy family-oriented and affordable attractions, such as roller coasters, live shows, variable depth pools, water slides, animal shows, miniature golf courses and arcade games.