Dwight D. McGarrah Sr.’s New Book “Looking Into the Mind of a Lost but Found Soul” Is a Collection of Letters to God and the World Recounting the Author’s Faith Journey

Recent release “Looking into the Mind of a Lost but Found Soul” from Page Publishing author Dwight D. McGarrah Sr. is a personal chronicle of redemption as he grows to recognize the blessings he rejected in his earlier life and ultimately finds faith in God’s grace. 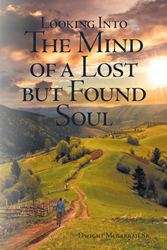 Dwight D. McGarrah Sr., a Connecticut native who served in the US military, has completed his book “Looking into the Mind of a Lost but Found Soul”: a poignant journal of a wayward soul’s journey back to God.

Dwight’s journey began in a quiet working-class neighborhood in New England. Dwight’s parents did everything they could to protect him from the evil forces of the world that existed beyond the borders of Rosemont Street. What Dwight knew about life at that time was to do his chores, keep his surroundings in order, keep himself in order, and do his very best in school. However, as Dwight grew from adolescence to early adulthood, he became bored with the secured life that his parents provided.

Dwight made the choice to join the military. His freedom away from his parents revealed a truly dark side of his personality. The beast in him possessed his overall character. Freedom from that quaint little neighborhood in New England caused him to think that the grass was so much greener outside of that neighborhood. With tunnel vision and green-tinted shades, not only was it greener, but it soon became delusional. Dwight finally realized that God is the answer.

Readers who wish to experience this inspiring work can purchase “Looking into the Mind of a Lost but Found Soul” at bookstores everywhere, or online at the Apple iTunes store, Amazon, Google Play, or Barnes and Noble.

About Page Publishing
Page Publishing is a traditional New York-based, full-service publishing house that handles all the intricacies involved in publishing its authors’ books, including distribution in the world’s largest retail outlets and royalty generation. Page Publishing knows that authors need to be free to create - not overwhelmed with logistics like eBook conversion, establishing wholesale accounts, insurance, shipping, taxes, and the like. Its roster of accomplished authors and publishing professionals allows writers to leave behind these complex and time-consuming issues to focus on their passion: writing and creating. Learn more at http://www.pagepublishing.com.