Today Congresswoman Barbara Lee (D-CA) and other leading members of Congress introduce a groundbreaking reproductive health bill, which currently has the support of 64 Congressional co-sponsors. The bill is endorsed by 36 national and state organizations united under the campaign All* Above All. 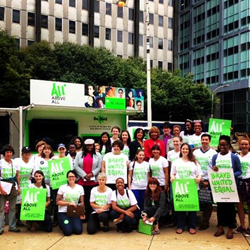 “A majority of Americans agree that a woman enrolled in Medicaid should have all her pregnancy-related healthcare covered by her insurance, including abortion services.”

Today Congresswoman Barbara Lee (D-CA), along with Congresswoman Jan Schakowsky (D-IL), Congresswoman Diana DeGette (D-CO) and 61 other Congressional co-sponsors, introduced the Equal Access to Abortion Coverage in Health Insurance (EACH Woman) Act. The bill would ensure health coverage for abortion for every woman however much she earns or however she is insured. The bill is backed by 36 national and state organizations united under the campaign All* Above All.

“Each and every day, the rights of women are under attack in America – today, we push back because every person has a right to healthcare. The EACH Woman Act is a bold and groundbreaking step forward. This legislation would ensure that every woman can access ALL of her healthcare options, regardless of how much money she earns or where she lives,” said Congresswoman Barbara Lee. “Regardless of how someone personally feels about abortion, none of us, especially elected officials, should be interfering with a woman’s right to make her own healthcare decision just because she is poor.”

“The passage of the EACH Woman Act would stop the terrible wrongs of the Hyde Amendment, which, for 37 years, have fallen hardest on people of color, low-income, and youth,” said Yamani Hernandez, Executive Director, National Network of Abortion Funds. “We applaud the bold vision of Representative Lee and the bill's co-sponsors.”

“In the last four years, anti-choice politicians have passed a record-breaking number of restrictions on abortion with the sole intent of pushing it out of reach. Too often low-income women and young women’s basic health care is traded away for political expediency. We are at a crisis point. Young people are demanding an end to unnecessary political interference in our decision-making,” said Kierra Johnson, Executive Director, URGE.

Specifically, the bill ensures that every woman who receives her health care or insurance through the federal government will be covered for all pregnancy related services, including abortion. In addition, it prohibits political interference with decisions by private health insurance companies to offer coverage for abortion care. Restricting Medicaid coverage of abortion forces one in four poor women seeking abortion to carry an unwanted pregnancy to term.

“While abortion is still a legal right in this country, abortion coverage for low-income women remains one of the leading barriers to reproductive health care in the United States. Every day, we talk to women on our Hotline who face decisions about selling personal items or not paying their rent or utility bills so they can access this basic health care. It’s unconscionable that we have allowed politicians to take away some women’s decisions just because of where they live or their income level,” said Vicki Saporta, President, National Abortion Federation.

Since the passage of the Hyde amendment in 1976, Congress has withheld coverage for abortion services from women insured through the Medicaid program. This restriction has a widespread impact for women across the country as approximately 1 in 6 women of reproductive age (15 to 44) are enrolled in Medicaid. Politicians in 25 states have adopted restrictions that interfere with abortion as a covered health service in the private insurance market, with ten banning coverage in all private plans except in very limited circumstances. And on January 22, 2015 the House again passed H.R. 7, which would codify and expand the Hyde Amendment, apply it to all government spending, and put private insurance coverage of abortion out of reach for most women.

“A majority of Americans agree that a woman enrolled in Medicaid should have all her pregnancy-related healthcare covered by her insurance, including abortion services,” said Jessica González-Rojas, Executive Director, National Latina Institute for Reproductive Health, referring to a new poll released by Hart Research Associates. “And among young people and people of color, that opinion is a tidal wave. Latinas are ready to change the game in Washington. We are organized, making phone calls, knocking on doors, and paying visits to our members of Congress. We are ready to do what it takes to make Hyde history.”

The All* Above All campaign is dedicated to lifting bans that deny abortion coverage. It is a diverse effort that is led by women’s health, reproductive justice and youth organizations.

About All* Above All
All* Above All unites organizations and individuals to build support for lifting bans that deny abortion coverage. Our vision is to restore public insurance coverage so that every woman, however much she makes, can get affordable, safe abortion care when she needs it.