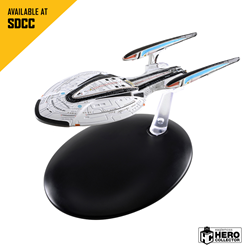 Eaglemoss Hero Collector, designers, manufacturers and publishers of high-quality collectibles from across the world of pop culture, pulls into port at Comic-Con International: San Diego with its largest ever assembled range of starships and other vessels from its officially authorized Star Trek collections, all of the most popular of which will be on sale at special prices at Booth #4337 beginning Wednesday, July 17 through Sunday, July 21 at the San Diego Convention Center.

All of Eaglemoss Hero Collector’s Star Trek programming at SDCC is part of the third annual “Summer of Trek” initiative, including a sweepstakes in which the Grand Prize is an Ocean View Voyage for 2 aboard the SOLD OUT Star Trek: The Cruise IV. Full details may be found at GetYourTrekOn.com.

And since not everyone can beam into Comic-Con, Eaglemoss Hero Collector has also created an online “virtual booth” (http://bit.ly/2NVplgC) that lets anyone purchase any or all of the products offered for sale on the exhibit floor, while supplies last.

Fans looking to enjoy substantial savings on Eaglemoss Hero Collector products, as well as access to exclusive offers, and encouraged to subscribe (http://bit.ly/32lUg90) to their favorite series. Fans can also go online to the Eaglemoss Shop (http://bit.ly/32i3S4G) to purchase collectibles individually at standard prices.

HERO COLLECTOR is Eaglemoss’ imprint for genre collectibles and is one of the world’s leading producers of figurines and fantasy die-cast vehicles. It makes products based on many of the world’s most popular entertainment brands including Marvel and DC comics and movies, Star Trek, Doctor Who, The Walking Dead, Game of Thrones, Alien, Predator, Back to the Future, WWE, The Wizarding World and James Bond. For more information, visit http://www.herocollector.com.