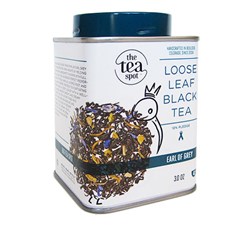 The result is an amazingly complex wheat beer that has a little more bitterness from the hops and the most amazing citrus finish that displays an intriguing balance of earl grey citrus and hop flower citrus. This beer is a perfect match for...

The Tea Spot announces today a new use of its Earl of Grey loose leaf tea–as a flavoring ingredient in a Apollo Tsai–the latest microbrew from Boulder, Colorado-based FATE Brewery.

FATE Brewery’s head brewer, Jeff Griffith, created the beer with Kyle Hollingsworth, from the band “The String Cheese Incident”. Kyle is a beer fan and avid home brewer. Jeff and Kyle developed the style and recipe of the microbrew and found it to be a perfect fit with The Tea Spot’s Earl of Grey. FATE Brewery Founder, Mike Lawinski, stated ”The beer is an American Honey Wheat that we hopped up like an India Pale Ale. We blended it with some of your Earl of Grey tea that we steeped on our 3 barrel brew house. The result is an amazingly complex wheat beer that has a little more bitterness from the hops and the most amazing citrus finish that displays an intriguing balance of earl grey citrus and hop flower citrus. This beer is a perfect match for the late summer heat and fall harvest.”

The beer falls under the Hoppy Beer naming structure at FATE Brewery. One of FATE’s core beers, the Moirai IPA, is named after the three women who in Greek mythology determined man's fate. So every hoppy beer FATE produces will have a Greek name relating to the beer and mythology. In this case- Apollo is the Greek god of music and Tsai is the Greek word for tea. So the brewers at FATE chose this name in their collaboration with Kyle Hollingsworth, a music wizard, by naming it after the god of music. And, the brewers at FATE like to think that Apollo's drink of choice would naturally be beer mixed with tea.

The Tea Spot’s Earl of Grey loose leaf black tea takes a modern twist on the traditional Earl Grey by combining the expected bergamot flavoring on black tea leaves and then adding other citruses, vanilla, licorice root and mallow flowers. The result is a smooth, bright and creamy flavor profile. It is one of The Tea Spot’s award-winning and best-selling teas.

The Tea Spot’s Wholesale Sales Director, Elise Ridgway, spoke enthusiastically about the project: “This extension of using The Tea Spot’s premium teas in a quality beer exemplifies the innovative way in which FATE does business. In addition to great beer, they serve delicious and high quality food to give the best experience possible to a wide array of people. The Tea Spot teas are a perfect addition to their sumptuous brunch!”

About FATE Brewery: FATE Brewery’s mission is to share with the world their passion for craft beer, love of innovative crave-able food and devotion to service and community. FATE Brewing Company is the brainchild of Owner and Founder, Mike Lawinski. He spent the last 10 years working for the Big Red F Restaurant Group, as the operations manager for both Centro Latin Kitchen and the West End Tavern. It was in this role that he discovered his dream and eventually what would become his FATE…to start his own restaurant and brewery that will provide crave-able innovative comfort food, expertly paired with craft beer and served by a passionate staff.

About The Tea Spot, Inc.: The Tea Spot is a for-profit philanthropic business producing handcrafted loose leaf teas and Steepware® – the tools that make loose tea easy. The Boulder, Colorado-based woman owned and operated company was founded by Maria Uspenski in 2004. A cancer survivor drawn to the health benefits of leaf tea during her recovery, she set forth to modernize the loose-leaf tea experience. Her message is simple and powerful: tea in its freshest form renders incredible flavor, unmatched health benefits, and is eco-friendly. The Tea Spot is a Certified B Corporation and ensures that its products uphold clean, sustainable and fair manufacturing standards. The company’s model of social entrepreneurship incorporates a culture of giving as it grows: ten percent of all profits are donated in-kind to cancer and community wellness programs. TheTeaSpot.com