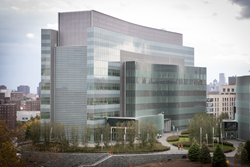 The Elionix ELS-G100 will aid researchers in developing novel micro and nanoscale devices, such as nanophotonic and solid state circuits, microelectromechanical systems and microfluidic systems.

SEMTech Solutions, in partnership with Elionix, is pleased to announce the delivery of a 100kV Electron Beam Lithography (EBL) system to the City University of New York’s (CUNY) Advanced Science Research Center (ASRC). The ASRC focuses CUNY initiatives in five dynamic fields of applied science: Nanoscience, Photonics, Structural Biology, Neuroscience and Environmental Sciences. The NanoFabrication unit will enable the fabrication and characterization of a wide range of micro and nano structures.

The Elionix ELS-G100 is capable of generating patterns with a line width of 6nm. The system provides a stable 1.8nm electron beam using high beam currents at 100kV accelerating voltage. The system’s Windows™ based Graphical User Interface (GUI) provides for ease of use in a diverse, multi-user environment. These features are becoming the standard in universities worldwide.

“The Elionix Electron Beam Lithography system will enable us to routinely write patterns of less than 10 nanometers in size,” says Dr. Jacob Trevino, NanoFabrication Facility Director. “We will count on this system to aid researchers in developing novel micro and nanoscale devices, such as nanophotonic and solid state circuits, microelectromechanical systems and microfluidic systems.”

The Elionix model ELS-G100 is a recent product launch that incorporates a new 100MHz high-speed deflection system. According to Ken Koseki, Overseas Sales Manager for Elionix in Japan, “This system offers up to 10 times the throughput of our previous generation EBL tools.” Further, he states, “We are excited that so many graduates of CUNY colleges have won Nobel Prizes throughout the years and we look forward to being a trusted and reliable partner. It is our hope that this system will contribute to the launch of many successful initiatives undertaken by CUNY.”

About The CUNY ASRC NanoFab:

The CUNY ASRC NanoFab is a shared research space open to students, faculty, research staff, government and industrial partners. For users, the NanoFab provides an opportunity to carry out hands on research with some of the world’s most sophisticated instruments for the fabrication and characterization of materials at the micro and nanoscale. The ASRC NanoFab operates in an environment where the levels of dust, airborne microbes, temperature and humidity are controlled. The ASRC NanoFab is among the most advanced cleanroom facilities on the East Coast, meeting class 100, class 1,000 and class 10,000 standards, comparable to the one now closest, at Brookhaven National Laboratory.

Established 40 years ago, Elionix manufactures systems that utilize particle beams; electron, ion and electromagnetic waves that include light and x-ray. Over the years, Elionix has manufactured more than 350 dedicated electron beam lithography systems and maintains the largest market share in Japan, which is widely known for world-class electron beam design and development.

SEMTech Solutions is the exclusive sales and service representative for Elionix in North America and Europe.