Get "All Shook Up" with this Ultimate Elvis Birthday Bash tribute concert celebrating the life and music of King of Rock-n-Roll. 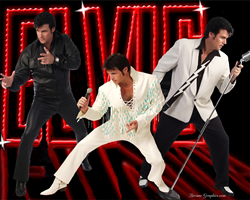 This January 8th marks what would have been Elvis Presley's 85th Birthday. We say "what would have been" because tragically almost 43 years ago on August 16, 1977 at the age of only 42 we lost one of the greatest entertainers and pop culture icons of all time. "Are you still lonesome tonight" for the energy, charisma and incredible voice of one of the most enduring entertainers of stage, screen and television? Gone but never forgotten, his image, music, films and memory live on as a testament to his true effect and influence on his generation and future generations to come. The original American Idol who influenced the Beatles, The Rolling Stones and anyone that has ever picked up a guitar or a microphone since, continues to engage our love affair with his "All American story of a shy poor and humble country boy that became the King of Rock-n-Roll".

Keeping the memory alive at countless venues throughout the country Chris MacDonald lovingly shares the magic of the “King of Rock-n-Roll” with his tribute Memories of Elvis Rockin Birthday Bash. Elvis lives with this ultimate tribute. The show is not a parody or an overdone impersonation. There is a true understanding of what Elvis did best; connecting with his music and the heart of his audience. With his high energy 10 piece concert band,dancers and singers, Chris MacDonald draws his audience in with the look, sounds, and nuances that made Elvis the King.

Adding to the authenticity of his tribute, Chris has the honor of being the only tribute artist hired by Elvis Presley Enterprises to perform at Graceland’s Heartbreak Hotel. An energetic and experienced entertainer, MacDonald has also starred in the famous LEGENDS IN CONCERT stage productions and has performed in Branson, MO, and Las Vegas, NV. He has also performed in Concert with Elvis Presley’s original back up vocal group The Jordanaires and D.J. Fontana Elvis's original drummer with shows at the Seminole Hard Rock Live Concert arena and the Broward Center for the Performing Arts.

With this newly updated Memories of Elvis Rockin Birthday Bash production MacDonald says, "The show will include costume changes, songs and video clips telling the story of the different stages of Elvis’s incredible career including the 1950′s, the Movies, the 1968 Comeback and the 1970′s White Fringe Vegas Concerts. It’s all a part of this loving tribute to one of the greatest entertainers of all time. Bring the whole family out to celebrate the life and music of the King of Rock-n-Roll."

This reporter asked if there was anything more he'd like to say before leaving the building. Chris MacDonald said with an awe shucks smile, "Don't be Hound Dog crying cause you missed a fun night of music and memories of the King. Hope to see you there.Happy Birthday Elvis and Thank you, Thank you very much".