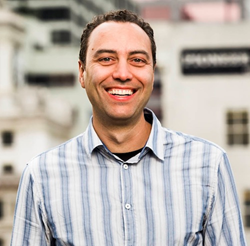 Having been recognized by the Academy after so many years for the Universal Capture technology that we passionately believed in gives a whole new meaning to my years working in the visual effects and video game industries.

Embodee Corp.’s chief technology officer, George Borshukov, will receive an Academy Award for technical achievement at a presentation dinner on February 7 in Beverly Hills, California. He and two former colleagues are being honored for their pioneering work in creating realistic virtual human faces of actors.

The technology, called Universal Capture, was used in "The Matrix Revolutions" and "The Matrix Reloaded," the 2003 sequels to "The Matrix." This work has since inspired shape- and texture-capture methods creating even more believable computer-generated images of movie actors and video game characters.

It’s the second technical achievement Academy Award for Borshukov. He was also a key member of teams that won back-to-back Oscars for Best Visual Effects for "What Dreams May Come" and "The Matrix," awarded in 1999 and 2000.

Borshukov’s breakthrough work in developing computer-generated virtual faces indistinguishable from those of actors was a stepping stone for his work at Embodee. Together with the company’s technology team, he architected a software platform that delivers virtual 3D visualizations of apparel and footwear in unprecedented detail, such as texture and drape. Applications include online customization and try-on.

The award from the Academy of Motion Pictures Arts and Sciences is among 21 that will honor 54 people. Achievements receiving Scientific and Technical Awards must demonstrate over time “a proven record of contributing significant value to the process of making motion pictures,” according to the Academy. Other Academy Awards to be presented this year are for achievements in 2014.

Honored with Borshukov are Dan Piponi and Kim Libreri. Together they developed Universal Capture to create some of the most memorable scenes in the two "Matrix" sequels, including The Superpunch and the Burly Brawl.

“Having been recognized by the Academy after so many years for the Universal Capture technology that we passionately believed in gives a whole new meaning to my years working in the visual effects and video game industries. And that experience has been critical to my work at Embodee.

“The years of the "Matrix" movies were pioneering times when Dan, Kim, and I had the incredible opportunity to develop cutting-edge technologies working with fearless VFX Designer John Gaeta and the directors, The Wachowskis.

The challenge, Borshukov said, was to produce photorealistic, animated renditions of actors Keanu Reeves (Neo), Laurence Fishburne (Morpheus), and Hugo Weaving (Agent Smith). And the renditions needed to inter-cut seamlessly with footage of the real actors. Up until then, no one had created believable “digital doubles” of actors’ faces using computer graphics.

Faces posed a significant problem because of their unique individual intricacies, including fine details such as pores and wrinkles. (To learn more, see the video Borshukov created illustrating key steps in the development and use of Universal Capture.)

The trio also received a Sci-Tech Academy Award in 2001 for developing image-based virtual cinematography techniques for replicating real film sets and locations. That technology was first used for "The Matrix." Borshukov was technical designer for the film’s famous Bullet Time sequences.

The technologies that Borshukov, Piponi, and Libreri developed later inspired or contributed to development of other systems used in many movies and video games.

The Sci-Tech Awards are decided not by voting of all Academy members, as done for Best Movie and others, but by a committee after a rigorous review process to prove the value of the achievements and to verify that they significantly advanced the film industry.

Borshukov left the film industry to work for video game developer Electronic Arts, where he set standards for facial capture, animation and rendering, and fostered innovation in high-fidelity graphics and new forms of interactivity, including 3D camera-based gestural interfaces. He joined Embodee in 2009 to bring his expertise in realistic image generation to visualization of apparel.

About Embodee
Embodee Corp. was founded in 2008 in Portland to develop methods for helping the apparel industry use 3D visualizations in merchandising and selling products online. The company has evolved and now delivers virtual product experiences for business, enabling companies to give their customers an immersive visual interaction with their products, enriching the online shopping experience.

The Superpunch from "The Matrix Revolutions"

The Burly Brawl from "The Matrix Reloaded"