Recent release “Harry the Lonely Spider” from Page Publishing author Daniel Bouchard picked up on the anti-bullying messaging of today and created a story in which a spider cannot play with all the other insects because they are afraid of the way he looks. 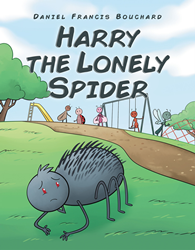 Daniel Bouchard, a Pompano Beach, Florida resident, has completed his debut book “Harry the Lonely Spider”: an inspiring story that shows the effects of bullying on children through Harry, a spider who wants nothing more than to play with all the other bugs, but is never invited because of how he looks, not who he is. It is not until he sees another insect, who is also bullied out of playing with the others, that together, they find the courage to be themselves and to make friends with one another.

“Harry the Lonely Spider is a story about a lonely spider who is shunned due to his scary appearance,” Daniel Bouchard said of his story. “Whenever Harry approached other individuals at the playground, they would all become frightened and run away. Harry was left friendless and lonely, and felt as if he would remain this way his entire life. Then one day, when Harry went to the playground in an attempt to find acceptance, and possibly a friend, Harry saw a caterpillar with a huge red nose crying and alone.”

Published by New York City-based Page Publishing, Daniel Bouchard’s heartfelt work is accompanied by colorful illustrations that can assist young readers who may struggle with the words.

The story follows Harry and his caterpillar friend, Terri, as they form a bond that was unknown to them both before meeting. One day, Terri grows sick at Harry’s house and is forced to lie down. When she emerges, she has evolved into a beautiful butterfly. With his friend in her new form, Harry goes to the playground with Terri and all the other insects see that there was nothing to be afraid of and no reason to shun these two unique bugs.

Readers who wish to experience this transformative book about the dangers of bullying can purchase “Harry the Lonely Spider” at bookstores everywhere, or online at the Apple iTunes store, Amazon, Google Play or Barnes and Noble.