Cigar Advisor Magazine is a digital publication dedicated to providing cigar enthusiasts with entertaining and informative content. Their latest issue features an interview with actor Eric Martinez, covering both his love of premium cigars and his latest project, a national anti-bullying campaign. 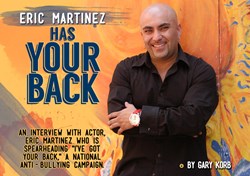 When I'm speaking to kids I always say, 'I got your back' at the end of my speeches. It just struck me to start my own campaign and name it 'I Got Your Back.' (IGYB). It started locally, then before I knew it, it went national, and now we're global.

The all-new Cigar Advisor is an online cigar magazine that brings a fresh, irreverent, and down-to-earth perspective on all things cigars to thousands of smokers. In addition to educational cigar content and behind-the-scenes cigar industry articles from some of the business’s top names, Cigar Advisor delivers an array of content about a variety of topics of interest to people who enjoy the cigar lifestyle. The magazine also features cigar reviews and ratings submitted by real smokers, and much more. Cigar Advisor Magazine has published an interview on the subject with actor and motivational speaker, Eric Martinez. Entitled, "Eric Martinez Has Your Back" Mr. Martinez talks to Cigar Advisor Magazine Executive Editor Gary Korb about being abused as a child and how he managed to turn a dark past into a bright future.

"I learned from an early age to not be a victim of my circumstances," writes Eric, "and it was hard at times to convince myself that I would ever get out of that situation alive. I knew that if I just kept praying and stayed strong I would be OK. Like they say, 'Tough times don't last, tough people do.'"

Being a "celebrity ambassador" to several organizations that deal with bullying and domestic violence, Eric wanted to start an organization of his own. Dedicated to helping youngsters deal with bullying, Eric says, "When I'm speaking to kids I always say, 'I got your back' at the end of my speeches. It just struck me to start my own campaign and name it 'I Got Your Back.' (IGYB). It started locally, then before I knew it, it went national, and now we're global."

As for his acting career, Eric has worked with Christian Slater in Love Lies Bleeding and Brian Gerathy from Jarhead. Currently he is working on a reality show about bullying with his friend, actor Quinton Aaron. "The show will bring the audience face-to-face with both the bully and the victim, give them an opportunity to talk, and go deep into the reasons it's happening."

A few years ago Eric discovered the enjoyment of smoking premium cigars.
"I've been hooked ever since," says Eric. "There's just something about cigar smoking that's sophisticated and gives you swag." Some of his favorite cigars include ACID Blondie, Alec Bradley Cigars, and Camacho Cigars, among others.

People interested in learning more about Cigar Advisor Magazine, or reading the full interview with Eric Martinez should visit CigarAdvisor.com.