Erma Danley’s newly released “Hearing from the Father’s Heart” is a powerful collection of messages carrying loads of inspiration, hope, wisdom, and encouragement

“Hearing from the Father’s Heart: Whispers in the Night” from Christian Faith Publishing author Erma Danley is a heart-calming pool of page-by-page Biblical inspirations written to uplift spirits and bring renewed hope to people exhausted by the burdens of daily life. 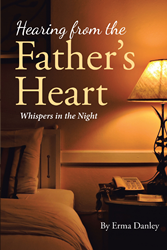 Danley shares, “The youngest of seven children, Erma was raised by elderly parents. Approval and affection were scarce. Learning that achievement meant approval and being right meant acceptance, she pushed herself to perform. She graduated as valedictorian of her high school class. A few weeks later Erma married Harold, the Korean War veteran and charming bad-boy. She believed that if only she could be good enough, he would truly love her and show it by changing into the man she dreamed he could be. When their first child arrived, they called her Teena. She was the apple of her father’s eye. But tragedy struck when their second child came along. Timmy died at three days old, and Erma went home from the hospital with empty arms and a broken heart. The wounds from such a loss heal slowly, if at all. Harold’s inability or unwillingness to discuss the death of their son deepened Erma’s heartache. Three years later they were blessed to have another son they named Curtis. Her marriage to Harold lasted 35 troubled years before he lost his battle with diabetic complications from an injury sustained in the war. But pain is not her full story. Through it all, Erma learned what it means to be comforted and accepted. She learned what it means to be held, secured, valued and cared for. And she learned those things in the arms of the Father who walked with her in the pain. The book you hold in your hand is not a narrative of her life; it is the whisperings she heard in the night. Along the way, she developed the skill of Hearing from the Father’s Heart. She learned what it means to be loved. And now… you get to listen in.”

Published by Christian Faith Publishing, Erma Danley’s new book is a beautifully-written instrument to facilitate healing as it brings spiritual clarity and understanding to the wounded and hurting. May the readers open their hearts to accept the Lord’s plan for their lives as He blesses, comforts, and gives them strength for the days to come.

View a synopsis of “Hearing from the Father’s Heart: Whispers in the Night” on YouTube.

Consumers can purchase “Hearing from the Father’s Heart: Whispers in the Night” at traditional brick & mortar bookstores, or online at Amazon.com, Apple iTunes store, or Barnes and Noble.

For additional information or inquiries about “Hearing from the Father’s Heart: Whispers in the Night,” contact the Christian Faith Publishing media department at 866-554-0919.