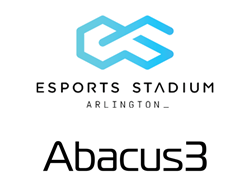 "We selected Abacus3 because of their team’s rich history in sponsorship and community building. They understand that what benefits the fan ultimately benefits the brand,” said Jonathon Oudthone (aka Panda), President of ESA.

Abacus3, a leading esports consultancy and marketing firm, was selected by Esports Stadium Arlington (ESA) as its partner to market the naming rights and sponsorship packages for the largest esports arena in North America.

“We take pride in being the largest, most turn key dedicated esports facility in North America. We are the hub for community events large and small year round. Our sponsors want to make a meaningful impact to the esports and gaming community. We selected Abacus3 because of their team’s rich history in sponsorship and community building. They understand that what benefits the fan ultimately benefits the brand,” said Jonathon Oudthone (aka Panda), President of ESA.

At 100,000 square feet, Esports Stadium Arlington’s distinctive layout meets the needs of every esports fan. The exhilarating tournaments that are broadcast to an international audience take place in ESA’s ultramodern competition space featuring a modular main stage that can accommodate 1v1 to 6v6 esports competitions. The Stadium also has enough open space for 100 person battle royale events. Additionally, the venue houses an entire production facility, complete with state-of-the-art HD cameras and a control room, and seating can scale from 250 to 2,500 spectators. This unique space is also adaptable to conferences and corporate events outside of esports.

For the local esports fan – and anyone visiting from out of town – ESA offers the Gaming Center, an expansive pay-to-play area featuring 42 gaming stations, 4 arcade cabinets, and a VR station. Open seven days a week from 12 p.m. – 2 a.m., fans are provided with a massive selection of games and can play on either PC or console.

Esports Stadium Arlington has been open for only a few months, and the Stadium has already hosted several notable esports events, including FACEIT’s Esports Championship Series Season 6 Finals (which was the most-watched CS:GO livestream on YouTube) and the Collegiate Rocket League National Championship. Several first- and third-party competitive events happen every week in the competition space, and with its dedicated Gaming Center, esports fans visit the arena to play daily.

“The central location of ESA is a major benefit for sponsors. The stadium rests in the heart of the country surrounded by family-friendly destinations. To top it off, ESA is supported by the flourishing esports scene in North Texas, the second largest gathering of esports-related businesses and industry in the United States. Esports Stadium Arlington is the premier esports destination and will be for decades to come,” said Skasko.

About Abacus3
Abacus3 is one of the most experienced esports firms in North America, offering a full suite of services from event production, customer/fan engagement, sponsorship and talent marketing to data analytics, media and strategic marketing. Abacus3 is the leading strategic partner in helping brands, event and media properties, and teams looking to navigate and capitalize on the rapidly expanding esports ecosystem.

About Esports Stadium Arlington
Esports Stadium Arlington, the largest dedicated esports facility in North America, is located in the heart of the city’s entertainment district, is a $10 million, 100,000 square foot dedicated esports facility built to serve the unique and technologically advanced demands of the esports industry. The Stadium--which was designed by award-winning architectural firm, Populous--features a Competition Showroom with a built in 85ft LED wall that’s accompanied by an immersive sound and theatrical lighting system. The broadcast is powered by a first of its kind Production Facility that harbors Grass Valley systems, a dedicated Observer Room, Caster Studio, Data Center and Control Room. Players will be able to stay on top of their game by utilizing the dedicated Team Area, which includes eight “Team Rooms,” a space for players to strategize and practice, a “Player Lounge” where players can relax and socialize as well as dedicated rooms for media, staff and talent. For more information, follow them on social media @esportsstadium or visit their website esportsstadium.gg – Emails can be forwarded to kyee@esportsstadium.gg.