The first and only undersea memorial to the 65 lost U.S. submarines and 4,000+ crew features new growth already on 2-ton structures arranged like a veterans cemetery in the ocean. 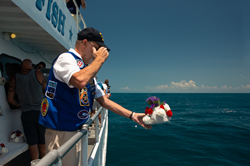 Submarine veteran salutes and places a flower-filled tribute reef over the rail at the On Eternal Patrol Memorial Reef site in May.

“Just a few weeks ago dive teams completed adjusting each of the 67 gigantic memorials so all face west toward the sea and are positioned in the same even columns and rows you’d see in any veteran’s cemetery,” said George Frankel. “It's our first step toward building an ‘Arlington of the Sea'.”

In time for Veterans Day, Eternal Reefs announces it has completed the first and only ocean memorial to the 65 lost United States submarines and more than 4,000 officers and crew who remain forever “on eternal patrol.” The memorial is the first and only such one honoring these brave military veterans in the environment in which they served, the sea. The On Eternal Patrol Memorial Reef site is in public waters nine miles off Sarasota, Fla. and consists of 67 individual structures each weighing as much as two tons. Although only on the ocean floor for as little as two months, significant marine growth is already appearing.

“Just a few weeks ago dive teams completed adjusting each of the 67 gigantic memorials so all face west toward the sea and are positioned in the same even columns and rows you’d see in any veteran’s cemetery,” said George Frankel, CEO of Eternal Reefs. “Each contains a plaque honoring the loss and is our first step toward building an ‘Arlington of the Sea'.”

No cremated remains are in any of the memorials which comprise the On Eternal Patrol Memorial Reef, although the primary service of the project manager, the non-profit Eternal Reefs, is incorporating a person’s cremains into a similar reef balls structure, then deploying it to the ocean floor to be a permanent creative environmental memorial that replenishes the dwindling natural reef systems in marine habitats. Each of the On Eternal Patrol memorials – which can weigh up to 4,000 pounds - contains a plaque noting the name of the lost sub, the date of loss and loss of life and the best-known coordinates when lost.

“Along with a host of amazing partners, it has been a two-year journey to complete the On Eternal Patrol Memorial Reef,” Frankel said. “Over time, we’ve met brave and inspiring submarine veterans, family members of those lost when those 65 subs went missing, and passionate military supporters from the public and all branches of the service. We are humbled and grateful to do a small part in helping to give honor and respect for all those who served – and continue to make sacrifices – in the United States ‘silent service’.”

At the time of final placement in October, six structures in the On Eternal Patrol Memorial Reef had been in the marine environment for five months, the remaining 61 for just two months. All of them have experienced significant marine growth, documented by diver photography.

“When you look at the underwater pictures and video, it’s extraordinary to see the amount of marine activity and vibrant growth in just these few short months,” Frankel said. “I don’t know of a better testimonial for reef building and for honoring submarine veterans than this one from Mother Nature herself, as she adds prolific new life to the On Eternal Patrol Memorial Reef.”

On 27 May 2018, Eternal Reefs joined with United States Submarine Veterans, Inc. (USSVI), Sarasota Military Academy Prep School, and a host of other military, state and city organizations to dedicate the On Eternal Patrol Memorial Reef in a land side ceremony. Military Funeral Honors were given that day to all 65 lost boats and crews with middle school student docents presenting funeral flags to retired submariners and learning details of “their” submarine.

On 22 May 2019, Eternal Reefs took six of the 67 total memorial reefs to the ocean site nine miles off the Sarasota coastline. The six structures represent those four submarines lost since WWII, one memorial honors those officers and crew lost in non-sinking incidents, and a final memorial for the entire project and honoring the USSVI. With the Exuma Trader handling the placement, another vessel, the Flying Fish, brought 70 retired submariners and other military representatives to the ocean site along with family and friends. As the Tolling of the Boats rang out for each lost sub, each submariner recognized and honored the sacrifice by approaching the rail and dropping a handheld, flower-filled tribute reef into the ocean. Soon a patchwork of floating red, white and blue flowers filled the surface as the six 4,000-pound structures were placed by crane on the ocean floor.

On 13 August 2019, the U.S. Coast Guard Buoy Tender the Joshua Appleby and her crew brought 33 of the memorial reefs to the reef site. The Exuma Trader brought the remaining 28 memorials out to the site and transferred them to the Joshua Appleby. Each memorial was placed in the order the boats were lost. As weather permitted, on 10 October 2019, the Reef Innovations dive team started the process to properly orient each memorial structure to face west, out to sea, and space the reefs four feet apart. On 21 October 2019, the Sarasota Police dive team joined with the Reef Innovations dive team to complete the final placement and orientation of the On Eternal Patrol Memorial Reef Site.

About Eternal Reefs
The Genesis Reef Project dba Eternal Reefs, Inc. is a Sarasota-based non-profit organization that provides a creative, environmentally enhancing way to memorialize the cremated remains of a loved one. Eternal Reefs incorporates cremains into a proprietary concrete mixture used to cast artificial reef formations which are then dedicated as permanent memorials which bolster natural coastal reef formations. Eternal Reefs pioneered the concept of reef memorialization and, since 1998, the organization has placed nearly 2,000 Memorial Reefs in 25 locations off the coasts of Florida (North Atlantic, South Atlantic, Gulf Coast and Panhandle), Maryland, New Jersey, North Carolina, South Carolina, Texas and Virginia, substantially increasing the ocean’s diminishing reef systems. Memorial reefs can only go in properly permitted locations by the U.S. Government. Eternal Reefs has strategic partnerships with the Reef Ball Foundation and Reef Innovations. Learn more at http://www.EternalReefs.com or on the company’s Facebook page.

Structures in the On Eternal Patrol Memorial Reef are arranged in the same rows and columns seen in national veteran's cemeteries.

Sand puffs up as one of the 67 structures in the new On Eternal Patrol Memorial Reef is deployed to the ocean floor nine miles off Sarasota.

Submarine veterans honor lost shipmates at the site of the On Eternal Patrol Memorial Reef in May.

A reef structure in the On Eternal Patrol Memorial Reef shows significant marine growth five months after placement on the ocean floor.