On Friday, 17th October, 31 primary school children from around the UK will be competing at the final of the EuroTalk Junior Language Challenge (JLC) in London. Since March, the youngsters have learnt Italian and Japanese, and are now studying Somali ready for this week’s final. 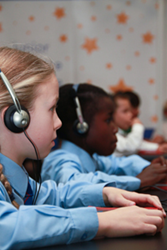 The children will be playing language games on iPads at the final.

The JLC was my first language teacher. I love it!

The national competition, organised every year by language learning publisher EuroTalk, aims to encourage a love of languages in children at a young age. “We get them learning some quite unusual languages,” explains Richard Howeson, EuroTalk’s director. “Not because we necessarily think they’re going to need those specific languages in later life, but because if they know they can handle Japanese or Somali, suddenly the languages they’re learning at school won’t seem so daunting.”

The final of the Junior Language Challenge will take place at Language Show Live, London Olympia, on Friday morning, where the finalists will compete on iPads in Somali language games. Each of the determined under-11s will be hoping to lift the trophy and win the first prize of a family trip to Africa.

Among them will be twins Nicole and Christian Rollinson from Malcolm Sargent Primary School, Lincolnshire; it is the first time siblings have competed together in the JLC final. “We’re very proud to have our twins in the JLC final, and applaud the efforts of EuroTalk to teach children the benefits of learning new languages, and doing it in such a modern and fun way,” say parents Shaun and Indira Rollinson.

There will also be some familiar faces, including nine-year-old Tudor Mendel-Idowu from Holme Grange School, Berkshire, who came third in last year's final, at the age of eight. This year, Tudor's hoping to claim the title. “The JLC was my first language teacher. I love it!” he says.

More than 1,000 children took part in the competition in 2014, each paying an entry fee and raising between them nearly £6,000 for charity onebillion, supporting the development and provision of apps to teach maths, reading and English to children in Malawi. A representative from onebillion will attend the final to talk briefly about the organisation’s work.

Next year’s Junior Language Challenge will start in March 2015.

About EuroTalk and the Junior Language Challenge

EuroTalk, based in London, UK, have been publishing language learning software for over 20 years, with a range of products now covering over 130 languages. They have been running the Junior Language Challenge for over ten years. The JLC 2013 winner, Ella Whittingham from West Bridgford, Nottingham, will be visiting Malawi later this month.