Preliminary results have now been released for an evaluation of tablet-based learning conducted by the University of Nottingham at Biwi Primary School, Malawi. A brief statement issued by Dr Nicola Pitchford reveals that children who used the ‘Masamu’ maths apps, created by education specialists EuroTalk, made significantly greater learning gains than those who did not. 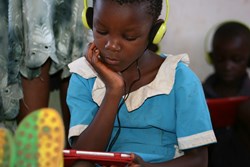 The children, at Biwi Primary School, Malawi, took part in the evaluation for eight weeks.

The gains they made were significantly greater than those shown by the other children that did not receive the EuroTalk Maths Intervention.

350 children from Standards 1-3 (ages 5-8) began the study in September with an initial assessment, which tested their basic maths, memory and motor skills. The children were then divided into three groups: a control group, continuing with their standard classroom teaching; a second group using tablets with a set of non-maths apps; and a group using tablets with EuroTalk’s Masamu maths apps.

These apps, in the local language of Chichewa, have been carefully designed to teach the core maths curriculum. All the teaching is interactive and visual, with audio support, so every child, including those with little or no reading ability, can use them.

The full report from the evaluation will be published in 2014, but preliminary results have now been released by Dr Nicola Pitchford, a psychologist from the University of Nottingham, revealing that the EuroTalk maths apps were more effective than the current teaching methods and the other, non-maths apps. “Children that had used the iPads with the EuroTalk Maths Intervention tripled their level of maths knowledge and concepts in just eight weeks,” states Dr Pitchford. “The gains they made were significantly greater than those shown by the other children that did not receive the EuroTalk Maths Intervention.”

EuroTalk’s managing director, Andrew Ashe, who was in Malawi for the conclusion of the study, was struck by how much the children enjoyed using the Masamu apps. “They were so engaged in what they were doing that it was very difficult to distract them. We could see them smiling and clapping their hands when they received a certificate, which was wonderful and demonstrated how much these children want to learn.”

The company is now looking to the future, and its vision to reach one billion children with the best possible educational resources. Besides maths, EuroTalk is also working on developing apps for reading and learning English. The team now hope, with the support of the Malawian government, to roll out the apps to all the primary schools in the country, with a total of two million children, before expanding to other countries.

“We recognise the huge potential of technology in education,” says Andrew Ashe. “And at EuroTalk we want to use that potential to improve the lives of a billion children, by giving them the learning they deserve. We’re delighted with the early results of Dr Pitchford’s evaluation, and look forward to her full report.”

Pictures from the evaluation at Biwi Primary School can be found on EuroTalk’s Flickr photostream.