Who’s The Best Behind the Wheel? Search for the Safest Driver Announced 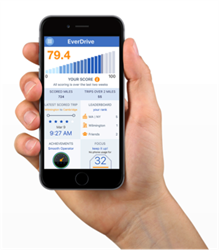 EverDrive encourages you to make better decisions behind the wheel, which leads to safer roads for everyone.

EverQuote, Inc. and Cambridge Mobile Telematics (CMT), today announced the launch of EverDrive, a new mobile app, in conjunction with a safe-driving competition designed to find and reward the safest drivers in New York and Massachusetts. EverDrive, available in the Apple App Store and on Google Play, passively measures a motorist’s driving habits and delivers helpful diagnostics for later review, enabling users to measure and improve their driving skills, as well as compete with family, friends and other users in their communities.

EverDrive, jointly developed by Cambridge Mobile Telematics (CMT) and EverQuote, runs in the background on iOS and Android phones and automatically measures driving behaviors - including speeding, acceleration, hard turning, harsh braking and phone distractions. At the end of each trip, drivers can view their performance, including a trip rating of one to five stars, a map of their route, and an overall driving score for the past two weeks. Interactive leaderboards show drivers how they rank relative to others in their city and state. Users can also easily invite friends and family to download the app to compare scores and earn bragging rights.

The app is available to consumers everywhere in the U.S., and as an introductory promotion, drivers in Massachusetts and New York can compete to win up to $50,000 in total cash prizes, including a $10,000 grand prize, in a contest that pits the two states’ drivers against each other to determine the safest driver, and finally decide which of the states is home to the best (or worst) drivers.

Any town in Massachusetts or New York that includes twenty or more ‘EverDrivers’ will automatically qualify for its own leaderboard contest, and any user who takes trips with EverDrive between April 5 and June 25, 2016 may be automatically qualified to win one of fifty cash prizes in a random draw sweepstakes.

“EverDrive encourages you to make better decisions behind the wheel, which leads to safer roads for everyone,” said Tomas Revesz, CTO of EverQuote. “Our mission is to provide an engaging experience that ultimately results in lower premiums and savings opportunities for consumers.”

According to the National Highway Traffic Safety Association (NHTSA) statistics, more than 90 fatalities and 6,405 injuries per day in the United States are due to vehicle crashes, and a 2015 study found that drivers in Boston are 157% more likely to get in an accident relative to the national average.

“EverDrive puts our pioneering innovations in mobile sensing, machine learning, and behavioral science directly in the hands of drivers and encourages substantial improvement through awareness and incentives,” said Hari Balakrishnan, CTO of Cambridge Mobile Telematics. “Our mission is to make roads safer by making drivers better.” CMT has developed several successful behavior-based programs for major insurance providers around the world.

About EverQuote
Founded in 2011, EverQuote, Inc. operates the leading online auto insurance marketplace in the U.S. EverQuote's data & technology platform unites drivers with agents and carriers to deliver great rates and coverage while maximizing policies sold for auto insurance providers. EverQuote is one of the fastest growing companies in Boston history. The company was founded with the vision of applying a scientific, data-driven approach to help consumers find the best price and coverage for their individual insurance needs. For more information, visit EverQuote.com and follow on Twitter @EverQuoteInsure.