SGC, a leading trading card grading and game-worn uniform authentication company, authenticated and graded an extremely rare Lou Gehrig jersey that sold recently for an astonishing $2.58 million. The historic piece of sports memorabilia was worn by the famous New York Yankees first baseman in his last great season in 1937. 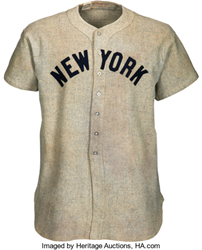 In just over two-months, collectors have spent more than $8 million on SGC authenticated game-worn jerseys. Ultimately, this means that our expertise continues to be sought-after in an industry where a dedication to accuracy and commitment to excellence is vital.

SGC, a top card grading and game-worn uniform authentication service, recently served as the official authenticator of fabled New York Yankees first baseman Lou Gehrig’s 1937 game-worn jersey that sold in Heritage Auctions for an unbelievable $2.58 million on August 17. The SGC-authenticated piece of Americana is particularly prized because the acclaimed player wore the jersey during his last great season.

The rare jersey was graded as ‘Excellent’ and authenticated by renowned SGC uniform expert Dave Grob. He was the same expert who recently authenticated the rare 1920s game-worn Babe Ruth jersey that sold for a record-shattering $5.64 million at auction in June.

“I can’t say I’m surprised by the pricing, as I have long felt uniforms like this one remain comparatively undervalued, especially if you take the time to actually understand and appreciate what they are and just how rare the chance of ownership is,” said Grob.

SGC CEO Dave Forman added: “In just over two-months, collectors have spent more than $8 million on SGC authenticated game-worn jerseys. Ultimately, this means that our expertise continues to be sought-after in an industry where a dedication to accuracy and commitment to excellence is vital.”

The recently sold 1937 Lou Gehrig piece is a light gray flannel button-down jersey that features “New York” across the front and Gehrig's retired uniform number "4" on the back. Notably, he was the first player in Major League history to be given that honor.

Although Gehrig would play the next full season in 1938, he began to slow down significantly on the field in what fans would later learn was the result of a yet undiagnosed terminal illness. Specifically, Gehrig was diagnosed with amyotrophic lateral sclerosis (ALS), which is now also called Lou Gehrig’s disease, on his 36th birthday on June 19, 1930.

Established in 1998, SGC is one of the most trusted card grading and game-worn uniform authentication companies for collectors worldwide. Comprised of experienced and respected graders and authenticators, SGC sets the industry standard with the consistency, integrity, and quality of its services. With a host of tech updates in progress, SGC customers will enjoy an array of unique collector support and security features, including an interactive submission platform with order tracking, grader notes, a rich database of all items ever graded by the company, high-quality card and uniform images, and much more. To learn more about SGC and its grading and authentication services visit http://www.gosgc.com, like the SGC Facebook page, and follow the company Instagram account @sgcgrading.