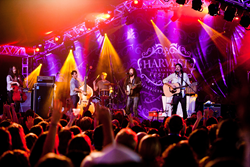 Culture-seekers can immerse themselves in musical performances, film screenings, art exhibits, and theater productions across the four provinces of Atlantic Canada this fall. New Brunswick, Newfoundland and Labrador, Nova Scotia, and Prince Edward Island, are home to diverse cultural experiences, special anniversaries, and festivals in September and October, when the weather is temperate and fall foliage is most colorful.

Overlooking the Saint John River in the capital of Fredericton, New Brunswick, the Beaverbrook Art Gallery is celebrating its 60th anniversary with special programming, exhibitions, and events planned throughout 2019. The museum added 14,000 square feet of space after a $11.5 CAD million expansion in 2017. Currently on display is the Grandfather Akwiten canoe, a significant First Nation's artifact dated to the early 1820s and believed to be the oldest birch bark canoe in the world. The Beaverbrook Art Gallery is open from 10am to 5pm Tuesday through Sunday, with admission starting at $10 per adult.

Blues, jazz, and world music take over Fredericton, New Brunswick, during the Harvest Jazz & Blues Festival. From September 10-15, 2019, the six-day festival stretches over three city blocks and 20 stages with more than 150 performances from nearly 400 artists. Travelers can explore historic downtown and stop by a collection of venues to listen, dance, and meet the musicians. For tickets, schedule of events, and more information, visit http://www.harvestjazzandblues.com/.

Travelers can forage a deeper connection to food through the Devour! Food Film Fest in Wolfville, Nova Scotia, from October 22 – 27, 2019. The six-day festival celebrates filmmakers and chefs alike with more than 100+ interactive food and film events, including culinary documentaries, cooking demos, and more. The theme for 2019 is Italian food and cinema. For tickets, a schedule of events, and more information, visit http://www.devourfest.com.

World-class musicians and local singers, dancers, and storytellers gather on Cape Breton Island, Nova Scotia, for the Celtic Colours International Festival, a celebration of Celtic music from October 11 – 29, 2019. With fall foliage as the backdrop, travelers can visit more than 32 communities across the province with more than 300 performances taking place in community halls, modern amphitheaters, and arenas. For tickets, a schedule of events, and more information, visit http://www.celtic-colours.com/.

Contemporary art exhibits created by more than 20 Canadian and international artists are installed in unconventional locations across Newfoundland and Labrador, from old post offices to rocky shorelines, during the second annual Bonavista Biennale from August 17 - September 17, 2019. Travelers can road trip across the Bonavista Peninsula, located on the east coast of the province, and make a stop at each exhibit along the way. For a schedule of events and more information, visit http://www.bonavistabiennale.com.

Established in 1989, the St. John’s International Women’s Film Festival celebrates its 30th anniversary in 2019. Located in the capital city of St. John’s, Newfoundland and Labrador, the festival takes place from October 16 – 20, 2019 with five days of documentaries, short films, and featured works to showcase women’s work in screen-based industries. For tickets, schedule of events, and more information, visit http://www.womensfilmfestival.com/.

In the capital city of Charlottetown, Prince Edward Island, the Charlottetown Festival showcases Canadian actors in musical theatre through September. This year, productions include the 55th season of Anne of Green Gables-The Musical™, Canada’s longest-running musical, as well as Mamma Mia, Spinning Yarns, and more. The celebration of performing arts takes place at the Confederation Centre, a national arts centre comprising an entire city block of theatres, an art gallery, and restaurants. For tickets, a schedule of events, and more information, visit http://www.confederationcentre.com

For more information on the four provinces, visit these websites or follow on social media: