Cigar Advisor Magazine is a digital publication dedicated to providing cigar enthusiasts with entertaining and informative content. Their January 2014 issue features a piece entitled "The Ferrari 360 Modena - Still Sexy 15 Years Later" that details the history of one of the most popular sports cars ever made. 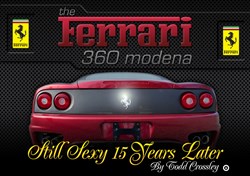 The Ferrari 360 Modena was a significant car for Ferrari, employing emerging technologies for design and manufacturing and raising the performance bar for the supercar industry.

The all-new Cigar Advisor Magazine is an online cigar magazine that brings a fresh, irreverent, and down-to-earth perspective on all things cigars to thousands of smokers. In addition to educational cigar content and behind-the-scenes cigar industry articles from some of the business’s top names, Cigar Advisor delivers an array of content about a variety of topics of interest to people who enjoy the cigar lifestyle. The magazine also features cigar reviews and ratings submitted by real smokers, and much more. Cigar Advisor Magazine has published a new article in its January edition. Entitled "The Ferrari 360 Modena: Still Sexy 15 Years Later," the article was written by Cigar Advisor contributor and ElegantMotorcars.com proprietor Todd Crossley. This article was published as a photo essay about the Ferrari 360 Modena.

Crossley begin the article with a discussion of Ferrari's roots. The Italian motor company's first road car was the 1947 125 Sport, which was powered by a 1.5 liter V12 engine. In 1950, Ferrari began fielding cars in Grand Prix Racing, and earned its first F1 World Championship in 1952. That tradition of success has translated to all forms of motorsports, and continues today, according to Crossley.

The F360 featured in the article was introduced in 1999 at the Geneva Auto Show. According to the article, "Instantly the car received praise for its stellar performance and its all-new curvaceous body. It was offered in a coupe (Modena) and a convertible (Spider). It was a significant car for Ferrari, employing emerging technologies for design and manufacturing and raising the performance bar for the supercar industry."

Some of those technologies included optional paddle shifters, extensive use of aluminum, and a 3.6-liter V8 that was capable of outputting 400 horsepower at 8,500 RPM. Additionally, the car's suspension was driver-adjustable, with Normal and Sport settings.