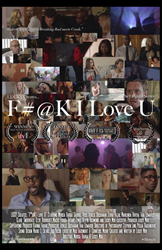 F#@K I Love U Season One Poster

LUCKY Creates… presents F#@K I Love U, a drama/comedy that examines love, sex, race, and politics while providing quality entertainment. It looks at family and what happens when events—many outside of their control --test their love and their bonds. The red carpet event, January 18th in Los Angeles, will pull back the curtain on one of the most critically acclaimed and anticipated new dramas of 2016. The 1st five episodes are available for viewing and have had over 200,000 views.

The story begins with an interracial couple, Douglas and Angie Winston. He being a black conservative, she a being white liberal will test an audience’s preconceived notions about what’s right and wrong in relationships. There are marital problems and betrayals of many different kinds. Adding to the intrigue, brotherly bonds are tested. Douglas was adopted at birth by a wealthy white family with a newborn son of their own named James "J" Winston. Once bonded as children, J’s reckless lifestyle has created distance between the two as adults. This creates more challenges to reconcile after betrayals are discovered. In season one; someone tries to kill members of the family in a drive by shooting. Who is the intended target? What will the consequences be?

Full of exceptional actors portraying exceptional characters, the stories interwoven in each episode make viewers clamor for the next episode. Each episode will be full of real life examples that viewers will find in their own relationships, or will seem to be ripped from todays headlines. No topic is safe from the introspection of these creatives.

Join to the red-carpet event on January 18th so you can get on board one of the most provocative new shows of 2016. F#@K I Love U will take on the unpredictable and never boring world of politics, love, relationships, and look at how race, gender, and sexuality play into the cauldron that makes up life for us all.

F#@K I Love U Season One Poster