Multi-line insurance carrier has been serving Chicagoland and broader Midwest since 1920. 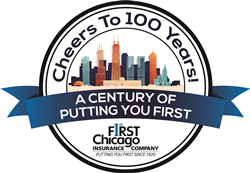 The company was started in 1920 by members of the Chicago District Ice Association who partnered to form the Chicago Ice Producers Mutual Liability Company.

The story of First Chicago is one of innovation, resilience, and commitment to its customers, The company would not be where it is today without the tremendous contributions of past and current employees as well as generations of loyal customers who have helped us reach this monumental milestone.

The company was started in 1920 by members of the Chicago District Ice Association who partnered to form the Chicago Ice Producers Mutual Liability Company. Originally based in downtown Chicago, Illinois, the company initially offered workers’ compensation, public liability, and property damage insurance to members of the ice and coal industries with its first written policies effective January 1, 1921. Today, it is wholly owned subsidiary of Warrior Invictus Holding Company, controlled by longtime insurance executive Jim Hallberg.

“The story of First Chicago is one of innovation, resilience, and commitment to its customers,” Hallberg said. “The company would not be where it is today without the tremendous contributions of past and current employees as well as generations of loyal customers who have helped us reach this monumental milestone. We are excited to celebrate this accomplishment, but also recognize there is more work to be done to achieve our ambitious goals for First Chicago.”

Through the years, First Chicago has evolved into a regional, multi-line carrier that currently offers personal auto, commercial auto, taxi and livery, workers’ compensation, general liability, and short term health insurance lines through a network of independent producers in multiple states, primarily in the Midwest. The company’s centennial anniversary plans include a promotional contest for independent producers as well as a monthly newsletter series that draws from First Chicago’s rich history in the insurance industry.

“It has been exciting to work with the ownership and management team at First Chicago for the past six years,” said Michael Rosenstein, President of First Chicago. “Our employee base is one of the best, with dedicated individuals who like to work hard and also have a little fun along the way. Our family atmosphere contributes to a fantastic work-life balance. Here is to hoping for a successful and eventful next 100 years!”

In the 1930s, the company expanded into the private passenger auto insurance market, opening its services up to referrals of family, friends, and business acquaintances from its members. In the decades that followed, First Chicago began to shift its focus from commercial insurance to personal auto insurance, temporarily dropping general liability and workers’ compensation insurance in the early 1990s. In 1991, the company changed its distribution system from direct writing to partnering with independent producers, which has allowed the company to expand its footprint in the non-standard auto market.

“There was a time when I didn’t know whether First Chicago would make it to 100 years. We knew that we needed to automate if we were going to survive,” said John Gettemans, who retired as President of First Chicago in 2013. “I’m proud of what this company has been able to accomplish. It’s been an enjoyable experience, I’m fortunate and blessed to have been a part of it.”

In 2006, the company was converted from a mutual form of governance to a stock company and renamed First Chicago Insurance Company. First Chicago has had five presidents in its history: Joseph Moudry from 1920 until 1965; Herbert Choice from 1965 until 1977; Thomas Dockery from 1977 until 1989; John Gettemans from 1989 until 2013; and Mike Rosenstein from 2014 to present.

About First Chicago Insurance Company
First Chicago Insurance Company (FCIC), whose roots trace back to 1920, is celebrating its 100th anniversary. Over the timespan, FCIC has evolved into a multi-line carrier, now offering General Liability, Workers’ Compensation, and writing various classes of Commercial Auto, in response to the needs of the commercial segment. In personal lines, FCIC has responded to the changing exposures and needs of their independent producers by adding niche insurance products such as Contents PLUS Renters, Transportation Network Coverage, as well as Short Term Health insurance to enhance their personal lines offerings. FCIC currently offers insurance via independent agencies and the Internet throughout Illinois, Indiana, Iowa, Kansas, Louisiana, Missouri, Pennsylvania, Texas, and Wisconsin. Headquartered in Bedford Park, FCIC is located at 6640 S. Cicero, Ave., Bedford Park, IL 60638. 1-888-262-8864 http://www.FirstChicagoInsurance.com