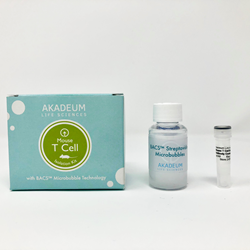 “The results from our beta testing program were fantastic, and we already have testers becoming customers. As a result of the success of the program, we are scaling up to fully launch products in the early part of 2019.”

Akadeum Life Sciences, Inc. has announced early access to its microbubble-based T cell and B cell isolation kits. A radical simplification over existing technologies, the use of microbubbles enables users to perform the entire cell separation process within a single tube and without a magnet.

The company has recently completed a beta testing program where key opinion leaders from across the US performed testing and provided feedback.

“The results from our beta testing program were fantastic, and we already have testers becoming customers. As a result of the success of the program, we are scaling up to fully launch products in the early part of 2019,” said John Younger, MD, Akadeum’s Cofounder and Chief Technology Officer.

“Due to product demand and enthusiasm, we’ve decided to offer an Early Access Program before our full commercial launch,” Younger said.

In addition to the isolation kits, Akadeum has made its BACS (TM) Streptavidin Microbubbles and Human Red Blood Cell Depletion Microbubbles available for purchase through this offering as well.

To participate in the Early Access Program, users are asked to contact Akadeum’s Product Manager, Thomas Jones, at Thomas@akadeum.com.

One beta testing site was at the prominent University of Wisconsin immunology lab of Professor Doug McNeel, where they routinely isolate mouse B cells. Lab member Ichwaku Rastogi, who performed the testing, said, “It was super quick—just 2 or 3 steps. Akadeum was quicker than any other kit I have used before.”

The potential of the company’s technology was recognized early on when Akadeum won Best New Technology at the CYTO 2017 conference, a leading flow cytometry and cell separation conference. The company is now building on this momentum and exploring new product applications with key industry partners.

Akadeum’s core products work by capturing cells with microbubbles and then gently floating them to a fluid surface where they can be easily extracted. The products were developed to create simpler workflows at a higher throughput while providing cost savings.

Key advantages of Akadeum’s microbubble products include:
-Cost savings due to eliminating expensive magnets and columns.
-Simplified workflows that come from incorporating the entire separation within a standard laboratory tube.
-Ability to run multiple samples at the same time (unlike magnetic methods, which require an additional magnet for each additional sample).

About Akadeum Life Sciences, Inc.
Akadeum Life Sciences was established to create the next generation separation technology and to fundamentally change the way that isolating cells and other biological targets is approached. The company is using microbubbles to solve longstanding problems in the industry. Separation applications include research, in vitro diagnostics, and cell therapy. The company is located in Ann Arbor, MI and was founded in 2014 by Brandon McNaughton, PhD and John Younger, MD. Inquiries into Akadeum’s products or technology can be made at info@akadeum.com or https://www.akadeum.com.