SMi's 4th annual Floating LNG conference, taking place on 17th - 18th February 2016 in London, will play host to leading Floating LNG innovators, with an array of case studies provided on current and upcoming projects from across the globe. The two-day conference programme will address how those at the forefront of the FLNG progress have adapted to various technology challenges and how they have made the most out of new business opportunities. 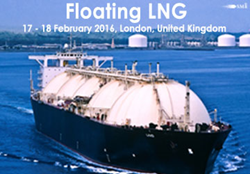 Shell, which set up a 5 million tonne LNG terminal at Hazira in Gujarat nearly a decade back, is aiming to grab a bigger share of the growing demand for imported gas in India. The Hague-based global energy giant is planning to set up a Floating LNG facility on the east coast - at Kakinada in Andhra Pradesh. Recently, Andhra Pradesh Gas Distribution Corporation (APGDC), GDF Suez, Shell and GAIL have signed a Memorandum of Understanding (MoU) to set up a Floating LNG terminal with an initial capacity of 5 mt, which could be doubled at a later stage.
(Source: The Financial Express, 25 September 2015, ‘Shell bets big on India with its second LNG terminal’)

Against this backdrop, SMi is proud to announce that Andhra Pradesh Gas Distribution Corporation and GAIL’s Managing Director, Sri S. Narayanan, will be leading a case study on Day Two at 09:50 titled ‘Terminal and Infrastructure Development in India: Upcoming Projects and Updates’. His presentation will cover the following key points:
Update on FSRU based LNG project at Kakinada
Pricing
Competition from alternate fuels and sector level price challenges

The two-day conference programme will provide updates on current projects, LNG market dynamics, advances in construction and technology, new business opportunities and how to make the most of them.