Dr. Randy Avent, president of Florida Polytechnic University, has been named to the Florida 500 list by Florida Trend magazine. The list recognizes the state’s most influential executives. 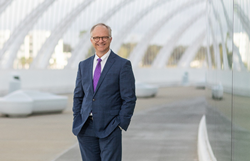 "It is an honor to receive this acknowledgement as Florida Poly forges its path as a leader in STEM education. As Florida Poly becomes a strong source of high-skilled graduates, companies gravitate to the University looking to benefit from that pipeline of talent."

Dr. Randy Avent, president of Florida Polytechnic University, is one of Florida’s most influential business leaders, according to Florida Trend’s Florida 500 list. The magazine just released its annual list recognizing the most influential executives in different economic sectors throughout the state.

“It is an honor to receive this acknowledgement as Florida Poly forges its path as a leader in science, technology, engineering, and math (STEM) education,” Avent said. “We strive to continue working with industry to advance economic opportunities and high-tech business growth throughout Florida.”

Avent is Florida Poly’s founding president, leading the University through many critical milestones since opening its doors in 2014. These include receiving accreditation from the Southern Association of Colleges and Schools Commission on Colleges faster than any other institution, and most recently becoming ABET accredited. ABET is the global accreditor of college and university programs in applied and natural sciences, computing, engineering, and engineering technology. Florida Poly is now part of a select group of institutions around the world with this prestigious recognition. Florida Poly has also positioned itself as a leader in the research of autonomous vehicle technology.

“Research universities are magnets for business development,” said Avent. “As Florida Poly becomes a strong source of high-skilled graduates, companies gravitate to the University looking to benefit from that pipeline of talent.”

The second annual Florida 500 list is based on categories used by the Bureau of Economic Analysis of the U.S. Department of Commerce, such as education, agriculture, hospitality, law, and real estate. Final determinations were made by the Florida Trend editorial department.

“The Influential identified here have a drive to ensure that Florida — with a population now at more than 21 million and growing by more than 900 new residents every day — moves forward in a positive direction,” Florida Trend publisher David Denor said in a letter accompanying the list. “They are assets for Florida, providing ideas and solutions to the issues that accompany rapid growth.”

About Florida Polytechnic University: Florida Polytechnic University is accredited by the Southern Association of Colleges and Schools Commission on Colleges and is a member of the State University System of Florida. It is the only state university dedicated exclusively to STEM. The University is a powerful economic engine within the state of Florida, blending applied research with industry partnerships to give students an academically rigorous education with real-world relevance. The campus is located in Lakeland, Florida along the I-4 High Tech Corridor. Connect with Florida Poly.