Lorraine “Lori” D’Angelo, an attorney with Injured Workers Law Firm, will commemorate her one-year anniversary this year, as a champion for injured workers’ rights. 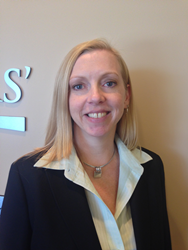 I prefer representing the injured worker because the injured worker tends to be less knowledgeable about the workers’ compensation system and needs more help than the insurance companies, who have lawyers on call for any questions.

Her quest to defend injured workers led seasoned attorney, Lori D’Angelo, to join Injured Workers Law Firm in 2014. In fact, the firm couldn’t have been a better fit for Lori, who has been practicing law for more than sixteen years, specializing in injured worker claims.

Injured workers can suffer a variety of serious and disabling injuries, and loss of the use of a body part is one of the most devastating accidents. Virginia Workers’ Compensation laws provide for certain durations of compensation for workers who suffer permanent loss of use, either full or partial, of a body part.

“Since Lori joined the firm it has allowed us to perform at an even higher level,” said Michele Lewane, trial lawyer and founder of Injured Workers Law Firm. “It’s not the amount of lawyers we have, but the systems and the team we have in place, and Lori exemplifies our mission to help the injured worker, even if they don’t need to hire us.”

For Lori, who has handled extremely difficult and high-profile cases throughout her career as a defense counselor, the move to Injured Workers Law Firm is a permanent one and as a former defense attorney, Lori knows the best strategies to protect injured workers.

“So often, as a defense attorney, I would see injured workers who should have gotten benefits, if they had just known how the system worked,” said Lori. “I would try to point them in the right direction, but they would often not trust my advice. I finally got tired of feeling like I was taking advantage of people who just did not know their way around the system and decided to try to help them.”

About Injured Workers Law Firm
Injured Workers Law Firm only handles Virginia workers’ compensation cases, solely concentrating on cases involving injuries acquired in Virginia that occur while one is on the clock and performing official job duties, as well as severe injuries, such as death or paralysis, that may occur in a factory setting or a construction site. For more information, call (804) 755-7755. The office is located at 7826 Shrader Road, Richmond, VA 23294.