Bethlehem University Vice-Chancellor to Speak in Indianapolis on behalf of Holy Land Franciscans on October 3, 2015 at the JW Marriott

Bethlehem University Vice-Chancellor to speak at a Franciscan charity event in Indianapolis to raise support for the Franciscan Foundation for the Holy Land’s efforts to safeguard the Christian presence in the Holy Land. The benefit dinner will include Mass, an expanded silent auction, dinner, speakers and closing remarks by the Archbishop of Indianapolis. 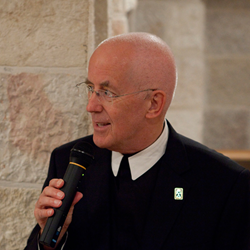 Br. Bray is the 8th Vice Chancellor of Bethlehem University, the first university established in Palestine and the only Catholic university in the Holy Land.

The Indiana Region of the Franciscan Foundation for the Holy Land (FFHL) will hold its seventh Holy Land Christian Benefit Dinner on October 3rd at the JW Marriott in downtown Indianapolis.

“It’s been a huge year for us,” said Mike LeCuyer, regional representative. “We launched a new website that makes information dissemination much more effective and enables donors to select the specific programs to which they want to give. We hope this upcoming dinner will not only be a celebration of this year’s successes but also a catalyst for local support for Christians in the Holy Land next year.”

The theme of the Indiana Region is “Preserving the Remnant of the Family of Christ” and refers to the mission of the FFHL to safeguard the Christian presence in the Holy Land and stem their exodus from the area. Severe travel and work restrictions imposed by the Israeli government have made it increasingly difficult for Christians Arabs to survive in their homeland. The most recent example is the controversial construction of a section of the Separation Barrier that separates families and land in the Cremisan Valley near Bethlehem.

During its 21-year history, the Franciscan Foundation has developed 14 programs to help Christians in the Holy Land go to school, find good paying jobs and secure housing. Education programs include scholarships to elementary and high schools as well as for bachelor degrees from top universities. Funds generated by the Indiana Region support several programs including the Magnificat Institute for Music, which offers a variety of music courses and varying levels, LeCuyer said.

The evening will include Mass, followed by cocktails, an expanded silent auction, dinner, a keynote speaker, awards and closing comments by the Most Rev. Joseph W. Tobin, C.Ss.R., Archbishop of Indianapolis.

The keynote speaker for the dinner will be Brother Peter Bray, FSC, EdD. Br. Bray is the 8th Vice Chancellor of Bethlehem University, the first university established in Palestine and the only Catholic university in the Holy Land.

Also attending the event will be Rev. Peter Vasko, ofm, President of the FFHL, and numerous other priests and seminarians. Emcee for the evening will be Very Rev. Joseph A. Schaedel, Pastor of St. Luke Parish in Indianapolis.

To make reservations for the dinner or to sponsor a table, email the FFHL at info@ffhl.org, call toll-free at (866) 905-3787, or visit the foundation website.

The Franciscan Foundation is an extension of the Franciscan Custody of the Holy Land, which is responsible to the Vatican for all Christian peoples, shrines and holy sites in the region.

JW Marriott downtown Indianapolis will serve as the venue.