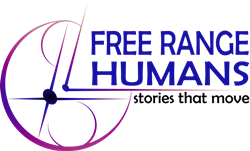 “Hearing impaired or not, sometimes catching all the words is hard, especially in a venue not designed for it.” says Producing Artistic Director Elizabeth Lucas.

Free Range Humans is taking its productions more immersive than ever with Jekyll & Hyde: An Immersive Musical Thriller, where patrons will follow the action through the rooms of a labyrinthine church, but that presents a challenge in an historic venue, where stairs are plentiful and a sign language interpreter would struggle to be in front of patrons who specifically need ASL. Solving for inclusivity takes a little extra time and technology and two different approaches.

“Hearing impaired or not, sometimes catching all the words is hard, especially in a venue not designed for it.” says Producing Artistic Director Elizabeth Lucas. Taking a cue from the opera world, where projected captions are common, the Free Range Humans production will install a series of projectors so each room has its own subtitles. “We hope these accommodations will enhance the experience for all our guests. In a production that moves, there are many reasons why a single person may not catch a lyric or two.”

But what about the stairs? “Using an historic building presents accessibility challenges, but it’s important to us to make all guests feel welcome,” says Lucas. Free Range Humans is bringing on an Accessibility Production Assistant specifically for streaming the production in harder to reach places. “Two thirds of the show takes places on a level six steps up, with chairlift access for wheelchair guests. When the story goes up a larger flight of stairs, the action will continue to be streamed in the great room. Any guest who doesn’t feel like doing stairs will be welcome to opt out and continue to view the show from the main floor.”

Jekyll & Hyde has mesmerized audiences the world over with its pop rock hits from multi-Grammy- and Tony-nominated Frank Wildhorn and double-Oscar- and Grammy-winning Leslie Bricusse. The Free Range Humans production is a thrilling 90-minute adaptation that streamlines the narrative while highlighting the songs audiences love.

Based on the classic story by Robert Louis Stevenson, a devoted man of science, Dr. Henry Jekyll is driven to find a chemical breakthrough that can solve some of mankind's most challenging medical dilemmas. Rebuffed by the powers that be, he decides to make himself the subject of his own experimental treatments, accidentally unleashing his inner demons along with the man that the world would come to know as Mr. Hyde.

Originally produced in Atlantic City by Broadway on the Boardwalk, this 90-minute adaptation is edited by director Elizabeth Lucas and is being done with the permission of the writers. Free Range Humans veterans music director Marci Shegogue, lighting designer TJ Lukacsina, and sound designer Brent Tomchik return, and are joined by fight choreographer Russell Rinker.