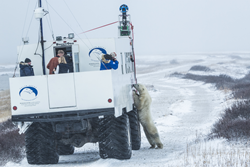 We’re able to share Churchill’s polar bears with people all over the world that may never have the opportunity to travel up here and lock their gaze with a wild polar bear."

Using Google’s mapping tools, people from around the globe can now explore the habitat of one of the world’s best-known polar bear subpopulations, all captured using a Google Street View Trekker mounted on a Frontiers North Adventures Tundra Buggy®. During October 2013 Frontiers North Adventures hosted the Google Maps team in Manitoba Conservation’s Churchill Wildlife Management Area and, with leadership from Polar Bears International, retained the Google Maps Trekker to capture imagery during November at Cape Churchill in Parks Canada’s Wapusk National Park. Both areas are near Churchill, Manitoba and home to one of the world’s most dense annual polar bear aggregations.

“By working on this mapping project with Polar Bears International, we’re able to share Churchill’s polar bears with people all over the world that may never have the opportunity to travel up here and lock their gaze with a wild polar bear,” said John Gunter, President and CEO of Frontiers North Adventures. “The more that people understand this environment and the challenges it’s facing, the better we can conserve it.”

As the premier tour operator in Canada’s subarctic, Frontiers North Adventures is the perfect partner for the project. Frontiers North Adventures has worked closely with Polar Bears International for more than a decade, helping to bring attention to the plight of the majestic animals as they face disappearing sea ice caused by climate change. Together, they helped Google by guiding the Street View Trekker team, capturing over 40 kilometres of interactive panoramic photographs.

“Frontiers North Adventures has always provided us a Tundra Buggy to conduct our research and programs,” said Krista Wright, Executive Director of Polar Bears International, the world’s leading polar bear conservation group. “Tundra Buggy One was developed specifically for our use. It’s a digital studio that we use to connect people to the world’s leading polar bear researchers, sea ice experts and other scientists. We’re used to interacting with guests of Frontiers North Adventures in the Tundra Buggy and at the Tundra Buggy Lodge. Through Google Street View, we can now show this amazing place to the world.”

The Churchill Street View project also has scientific value. “It will help establish a baseline record of imagery for the region,” said Wright. “This information is critical for understanding and communicating the impacts of climate change.”

“We love that Google is helping Polar Bears International raise awareness for International Polar Bear Day. And we acknowledge that our organization’s access to Churchill’s polar bears and the environment in which they roam makes us stewards of these precious resources,” said Gunter. “We’re absolutely thrilled that now with Google mapping tools we’re able to provide even better access to this unique northern environment and culture.”