GamerModz Breaks Sales Records in 2013 with Their Extensive Line of Xbox One, Xbox 360, PS4 and PS3 Modded Controllers. 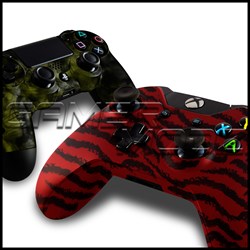 Custom Xbox One and PS4 Controllers

Being in a very competitive market, we strive to showcase the best variety of options so customers can create something truly personal.

2013 was a big year for Custom Modded Controllers and GamerModz was happy to be prepared. Marketing efforts paid off as companies such as MTV recognized GamerModz controllers as a unique gift idea for the holidays. Launching a large selection of hydro-dipped shells for Xbox One and PS4 as well as rapid fire mods for the new controllers, largely contributed to their success.

"Being in a very competitive market, we strive to showcase the best variety of options so customers can create something truly personal," says Gamermodz President Shawn Best.

Collaborations with MLG teams, the YouTube Gamers Network and Affiliates in the US and abroad helped to bring in sales from all over the world in 2013. GamerModz overseas sales had at a substantial growth over sales last year, emphasizing the demand for Custom Controllers in countries outside of the US. Web-based companies did extremely well overall with holiday shoppers turning to the internet for gift purchases without the long lines.

GamerModz is gearing up for another record-breaking year with Custom Xbox One and PS4 Controllers. Rapid Fire SPS X-1, X-2 and X-3 are currently available for both controllers with additional rapid fire add-ons coming soon. Customers can currently pick from a variety of hydro-dipped patterns and glossy colors to liven up their Xbox One or PS4 Controller. An extensive collection of shells, buttons, d-pads, triggers, etc. are in the works for the new controllers and will be launching in Spring 2014.

GamerModz is a Tampa, Florida based company that designs and manufactures Custom Controllers for the Xbox and PlayStation gaming consoles. In addition to manufacturing user designed fully customized controllers, GamerModz also manufactures individual custom controller parts and rapid fire mods for gamers. The innovative rapid fire technology allows gamers to set the rate at which their weapon fires in many popular first person shooter games such as the Call of Duty and Battlefield series. More information about GamerModz and their products can be found at http://www.GamerModz.com or by calling (866) 205-5268.