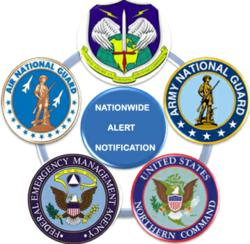 I believe Desktop Alert, Inc. to be the industry leader in offering options to meet organizational responsibilities to protect and preserve personnel and operational assets.

Major General Crabtree was the Commander of the Standing Joint Task Force for Elimination of Weapons of Mass Destruction and the Deputy Commander of the U.S. Strategic Command Center for Combating Weapons of Mass Destruction, located at the Defense Threat Reduction Agency, Fort Belvoir, VA. He was responsible for the manning, equipping and deployment of the joint headquarters to worldwide locations to counter WMD threats and to advise and coordinate programs with all agencies of the U.S. government on behalf of U.S. Strategic Command in meeting its role as responsible Department of Defense command for countering WMD threats.

Other areas of Air Force leadership included a tour as the Commander of 4th Air Force where he supervised a force of 21,800 personnel, Commander of the Air Reserve Personnel Center, where he managed records and personnel actions for an Air Force, Air Force Reserve and Air National Guard force consisting of over 984,000 personnel, active and retired. Maj Gen Crabtree was a Command Pilot with experience in F-4, C-130 and C-17 aircraft.

"The opportunity to join the team at Desktop Alert is exciting and gives me the opportunity to work helping with the critical requirement to be able to reach and direct actions of any organizations’ personnel in a timely and effective manner" stated Major General Crabtree. "In the environment of domestic and international threats that can flare up instantaneously the ability to use today’s information technology to react in a coordinated and effective manner is crucial. I believe Desktop Alert, Inc. to be the industry leader in offering options to meet organizational responsibilities to protect and preserve personnel and operational assets."

Worldwide U.S. Military organizations such as The United States National Guard, The United States Air Force Academy, Northern Command and NORAD, The United States Military Academy at West Point, Multi-National Forces, The U.S. Air Force, The U.S. Army now utilize the DTA mass notification platform daily for their organizations emergency communication requirements. Desktop Alert can contact thousands of computer users at their desktop and require them to click to confirm receipt of the message flashed on their screen. Those not verified can then be listed on a report and/or sent as a "Target Package" to be automatically contacted by other means such as email, SMS, phone calls and other devices.