The GetDismissed App is the first and only mobile application that helps drivers fight a traffic ticket by automatically preparing all of the documents necessary to submit a Trial by Written Declaration to the court. It's that simple. 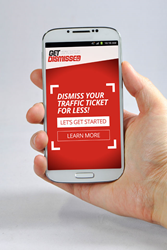 "It works too well. I'd like to arrest the guy who invented this thing." -Ron Souther, CHP Officer (retired)

GetDismissed, the first-ever App that enables California drivers to effortlessly fight traffic tickets, has debuted today. The free GetDismissed App is the first and only mobile application that helps drivers fight a traffic ticket by automatically preparing all of the documents necessary to submit a Trial by Written Declaration to the court.

The Process:
A California driver simply takes a picture of his/her driver's license and traffic ticket, answers a few questions, and the user-friendly GetDismissed App generates the necessary paperwork and emails it to the driver so he/she can fight his/her ticket via mail. It's that simple.

Up until recently, the only options available for fighting traffic tickets were going to court or hiring an expensive attorney to contest your traffic ticket for you. The GetDismissed App simplifies the ticket fighting process in California and removes the frustration associated with fighting a ticket in court. The GetDismissed App is FREE and available through the Apple Store and Google Play, as well as via http://www.GetDismissed.com. The cost for using the service to fight a ticket is only $49.

5.2 Million Traffic Tickets Annually in California:
There are over 5.2 million traffic tickets issued for infractions every year in California, but less than 10% of those tickets are ever contested. Once millions of smart phone owners see how straight forward and painless the GetDismissed App is, it is anticipated that the percentage of drivers fighting tickets in California will increase significantly.

Online Services vs. GetDismissed App:
Services like http://www.ticketbust.com and others were developed to facilitate the process of completing and filing a Trial by Written Declaration for drivers that didn’t want to go to court. Those online services charge fees that are significantly less than what an attorney would charge but still cost a few hundred dollars. GetDismissed has completely reinvented the category by offering a cheaper, more efficient, on-the-go option.

A Dismissed Traffic Ticket
When a traffic ticket gets dismissed, the driver does not receive any negative points on his/her driving record or pay any fines. It's as if they never received the ticket in the first place. In cases where a ticket does not get dismissed, the driver loses almost nothing. By simply filing a form TR-220 (Trial de Novo) within 20 days of the judge’s decision, he/she will be right back where he/she started--still able to go to court or request traffic school.

GetDismissed.com President, Steven Miller said, “With our team of attorneys, engineers, and designers, along with our marketing agency, we wanted to offer the most cost effective way to contest and dismiss a traffic ticket ever seen in the state of California. We believe GetDismissed meets that goal.”

About GetDismissed.com
GetDismissed.com, located in Westlake Village, California, was founded in 2014 by Steven F. Miller. The GetDismissed.com service is built on a platform that has assisted thousands of Californians with quickly and inexpensively filing the necessary paperwork to contest and dismiss their traffic tickets through the Trial by Written Declaration process. The GetDismissed App, available through the Apple Store or Google Play, is Mr. Miller’s solution to creating a very inexpensive, fully automated, and user-friendly online service for California drivers to submit their traffic ticket information, process the necessary documents and submit the case to the courts. It’s That Simple