A new survey published in the journal Weed Science offers insights into the distribution and management of giant ragweed, a plant known to cause significant losses in corn, soybean and cotton crops. 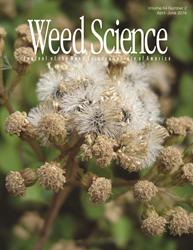 A new survey published in the journal Weed Science offers insights into the distribution and management of giant ragweed, a plant known to cause significant losses in corn, soybean and cotton crops.

Over the past three decades, giant ragweed has become an increasing concern, especially as herbicide-resistant populations have increased. To date, though, scientists have lacked quantitative data on how giant ragweed is distributed and spreads.

To help address this gap, a team of researchers from six universities and the USDA’s Agricultural Research Service surveyed certified crop advisors working in the Corn Belt regions of the U.S. and Canada. The survey explored the prevalence of giant ragweed and gathered information on crop production practices. The responses led to several key findings:

What do these findings mean for growers, weed scientists and regulators?

“Managing giant ragweed in noncrop areas could reduce its migration into crop fields and slow its spread,” says Emily Regnier of Ohio State University, a member of the research team. “Where the weed is already established in crop fields, it is critical that growers focus on diversification. They need to plant a more diverse combination of crop species, use more diverse tillage practices and reduce their reliance on herbicides with a single site of action.”

Weed Science is a journal of the Weed Science Society of America, a nonprofit scientific society focused on weeds and their impact on the environment. The publication presents peer-reviewed original research related to all aspects of weed science, including the biology, ecology, physiology, management and control of weeds. To learn more, visit http://www.wssa.net.