Glorious Twilight: ‘A Star out of Jacob’ Prefigures the End Times 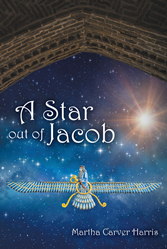 In an unconventional tale, sparkling with humor, ‘A Star out of Jacob’ by Martha Carver Harris delivers a deeper examination of the intellectual context surrounding the era of Christ’s birth, and its impact on a fat, forlorn, middle-aged woman wrapped up in the secular concerns of today.

Faye is an American Sunday school teacher of Persian extraction, linked by ancestry to the ancient Magi—an elite priestly class from the Parthian Empire (ancient Persia) who followed a Star to Bethlehem. Faye has vivid, inexplicable dreams related to the Magi’s journey and a young girl named Fatemah. But she dismisses the dreams while throwing herself into shrill, modern-day causes like climate change and animal rights. Along the way, Faye meets Sebastian, an irresistible Jew with an End-of-World theory to explore. Together they attend lectures on microbiology, cosmology, ancient astrology, and the fine-tuning of the universe. A romance develops.

But a fatal illness interrupts Faye’s mortal life and leads to an entirely new journey taking her back in time to First Century Palestine. There she learns about the intellectual ferment surrounding the era of Christ’s birth, and the belief that stars control human destiny. She discovers the Magi’s Zoroastrian beginnings, their exposure to Jewish Messianic prophecy and Greek philosophy, and their intense study of the stars. She meets Fatemah, whose dreams confirm the meaning of the Star over Bethlehem. She listens to the story of the Christ Child, the escape from Herod, and Fatemah’s return to Judaea 30 years later. She contemplates God’s increasingly urgent battle against evil, as modern man gets further away from the Truth. She concludes that movements of the cosmos may parallel great events on earth and anticipates a terrifyingly imminent revelation.

Harris’s knifelike character portrayals are both comical and delicately wrought, while her interweaving of ancient historical sources such as Josephus, Hipparchus, and the Dead Sea Scrolls lend weight and depth to a fascinating conclusion.

“A Star out of Jacob” received the following 5-star review on Amazon:

“This well-researched novel probes deeply into the intellectual world of the first century classical world and also into aspects of contemporary thinking on a number of important scientific and religious issues. The author has crafted a complex narrative with engaging characters. I particularly appreciated the inclusion of adequate source notes and a solid bibliography for those who wish to learn more about the subjects addressed. Highly recommended.”

About the author
Martha Carver Harris spent her career as a United States Foreign Service Officer. She served in U.S Embassies in Europe, South Asia, West Africa and the Middle East. A review of her first novel, “The Gospel According to . . . A Fictional Story of the People Who Encountered Jesus” is available on Kirkus Reviews. She is currently retired and resides in northern Virginia. To learn more, please visit http://www.marthacharris.net.