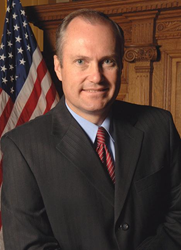 Lt. Gov. Casey Cagle will deliver the keynote address at the GME Awards.

The awards program is a new edition to the Expo’s programs that support and promote the manufacturing industry in Georgia.

In addition to Lt. Gov. Cagle, other speakers include Mike Wiggins, Director of “12 For Life” for Southwire, and Dan Campbell, CEO of Hire Dynamics. The Expo will take place June 13-14 at the Gwinnett Center, and is the second installment of the annual event put on by Georgia Manufacturing Expo (GME). The awards program is a new edition to the Expo’s programs that support and promote the manufacturing industry in Georgia.

GME added the awards program to specifically spotlight the people of Georgia’s manufacturing industry, which is part of the organization’s official mission.

“Nothing happens without Georgia's talented and dedicated workforce. We want to acknowledge the people that drive the manufacturing industry,” said GME founder, Jason Moss, about the reason the Expo added an awards program.

GME plans on expanding the awards program in order to help promote and foster a greater interest in manufacturing careers. Attracting new talent is one of the toughest challenges the industry faces.

During the ceremony only one plant manager will be awarded Plant Manager of the Year. GME will award four Frontline Leadership Awards. The awards breakfast is a ticketed event during the Expo. However, anyone that preregisters can attend the Expo for free. Ticket information for the awards breakfast and the Expo can be found at http://www.GeorgiaManufacturingExpo.com.

The addition of the Expo Awards is one example of how the organization has grown. It joins a successful GME Plant Tours Program that was very well received in its first year as part of the organization’s programming. Year over year, from 2013 to 2014, GME has seen a 50% growth in sponsors and exhibitors. Retail giant Walmart has joined as a sponsor as the company looks to invest an additional $250 billion in American manufacturing over the next ten years. Brands like Okabashi, MTI Baths, Platinum Sportswear, and many other products and service companies will be exhibiting during the two days event.