Honorees to be recognized during a virtual awards ceremony this December 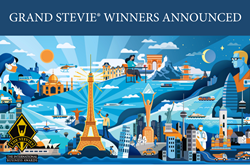 The Stevie® Awards have announced the winners of six Grand (“best in show”) Stevie Award trophies in The 2021 International Business Awards®.

The winners of the Grand Stevie Awards this year include LLYC who is the first organization to win two Grand Stevies in the same year, Telkom Indonesia, Google, Business Awards Consulting, and Ayala Land, Inc.

Nominees in the 2021 IBAs were not able to apply for Grand Stevie Awards directly. Winners were determined by a points system based on the total number of awards won in the IBAs with a Gold Stevie win counting for three points, a Silver Stevie win for two points, and a Bronze Stevie win for 1.5 points, as well as having the highest average score in selected categories.

This year’s Gold, Silver, and Bronze Stevie Award winners in The International Business Awards were announced on 16 August. They and the winners of the Grand Stevies announced today will be recognized during a virtual awards ceremony on 8 December.

Winners of the 2021 Grand Stevie Awards are:

Highest-rated COVID-19 Response Nomination: Telkom Indonesia, a state-owned information and communications technology enterprise and telecommunications network in Jakarta, won the Grand Stevie for their nomination "NVDS to Ensure Vaccine Authenticity Traceability, Quality and Accountability,” winner of the Gold Stevie for Most Valuable New Service During COVID-19. The nomination, which received an average score from the judges of 9.11 out of a possible 10, outlines the organization’s efforts to create a national vaccine distribution program for Indonesia, and the results of those efforts. Telkom Indonesia is no stranger to the “best of” circle at Stevie Awards programs: this is the 11th Grand Stevie Award won by the organization in one or more Stevie Awards programs since 2015.

Highest-rated New Product or Service: Google, the multinational technology company headquartered in Mountain View, California USA, has won its first-ever Grand Stevie Award, for Google Maps Live View. The Gold Stevie-winning nomination for Best Emerging Technology received an average score of 9.44 out of 10 from the judges.

Highest-rated Nomination of the Year: LLYC, the global communications and public affairs consulting firm headquartered in Madrid, Spain, won the Grand Stevie for the highest-rated nomination in the entire 2021 IBA competition (9.67 / 10), for “The Last Straw” – winner of the Gold Stevie Award for Marketing Campaign of the Year – Restaurants, for McDonald’s.

Most Honored Marketing Agency: Business Awards Consulting of Istanbul, Turkey, which specializes in researching and writing awards-competition nominations for its clients, earns the Grand Stevie Award for Most Honored Marketing Agency with 120.5 points, earned for Gold, Silver, and Bronze Stevie wins on behalf of clients including BURSALI, HALKBANK, Mayen, OPET, Sabanci Holding, TISK, and Zer Central Services and Trade A.S.

Most Honored Public Relations Agency: LLYC is the first company to ever win two Grand Stevie Awards in the same program in the same year. In addition to their win for Highest-rated Nomination of the Year, the agency accumulated 77 award points for their Gold, Silver, and Bronze Stevie Awards on behalf of themselves and clients including Deoleo, EY, Multópticas, and TOUS, among others. The agency has won eight Grand Stevies in Stevie Award competitions since 2013.

Organization of the Year: Ayala Land Inc. of Makati City is the Philippines’ leading developer of sustainable estates, offering a diverse mix of properties such as residential, retail, office, hotels, and leisure developments. They earned 69 points for their Gold, Silver, and Bronze Stevie Awards for nominations submitted in their own name, and thus will receive the Grand Stevie Award trophy for Organization of the Year.

“These six best-of-show Grand Stevie winners are emblematic of the breadth and quality of nominations we welcomed to the IBAs in 2021,” said Maggie Gallagher Miller, president of the Stevie Awards. “COVID-19 continues to test economic conditions in many parts of the world, but those challenges have been met and overcome in myriad ways by our 2021 Stevie Award winners. We look forward to honoring and celebrating them during our virtual awards ceremony on 8 December.”

Gold, Silver, and Bronze Stevie Award placements in the 2021 IBAs were determined by the average scores of more than 260 professionals worldwide in the three-month judging process. Winners were selected from more than 3,700 nominations submitted by organizations in 65 nations.

The nomination process for the 2022 IBAs will open in February. For more information about The International Business Awards, including a complete list of all Stevie Award winners in the 2021 competition, visit http://www.StevieAwards.com/IBA.