Jolanta Nowakowska-Zimoch, head of the Real Estate Practice in the Warsaw office of global law firm Greenberg Traurig LLP, was selected as the Gender Diversity Lawyer of the Year for Central & Eastern Europe at the inaugural Chambers Diversity & Inclusion Awards: Europe recently held in Amsterdam. 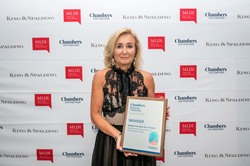 Jolanta Nowakowska-Zimoch, head of the Real Estate Practice in the Warsaw office of global law firm Greenberg Traurig LLP, was selected as the Gender Diversity Lawyer of the Year for Central & Eastern Europe at the inaugural Chambers Diversity & Inclusion Awards: Europe recently held in Amsterdam. The award is for a partner who is leading the way in their commitment to gender diversity. Natalie Carter, an associate in the firm’s London office, was recognized at the event as “Highly Commended” for the Future Leader - Minority Lawyers Award.

Chambers and Partners notes that the awards celebrate in-house legal teams and law firms who are furthering the advancement of diversity and inclusion across Europe: “With clients increasingly demanding to see improvements in inclusion from their law firms, the awards provide an opportunity for both general counsel and law firms to demonstrate the key work and success they are bringing to shifting the inclusion dial. The awards also provide the opportunity to shine the spotlight on role models and trailblazers in pro bono and corporate social responsibility as well as inclusion.”

The awards ceremony and dinner took place in Amsterdam on October 1. The host for the evening was the Chambers and Partners Head of Diversity & Inclusion, Dee Sekar.

About Greenberg Traurig’s Women’s Initiative: Greenberg Traurig is committed to its women lawyers’ success, which includes a firmwide women’s affinity group encompassing recruiting, retention, and business development. The firm regularly collaborates with like-minded organizations to address these issues on a broader scale in a variety of industries and communities. Greenberg Traurig also takes thoughtful action to address issues such as maintaining a healthy work-life balance, breaking the glass ceiling, mentoring, creating and maintaining healthy lifestyles, and giving back to the community.

About Greenberg Traurig’s Diversity Initiative: From its inception, Greenberg Traurig has been committed to diversity and inclusion in the workplace. Greenberg Traurig is a uniquely empowering and diverse firm built on a foundation of fairness, equality, and authenticity. The firm's efforts have been recognized by local, national, and global publications and organizations including, Chambers and Partners. Web: https://www.gtlaw.com/en/general/our-firm/diversity Twitter: @GT_Drives.

About Greenberg Traurig, LLP: Greenberg Traurig, LLP (GT) has approximately 2100 attorneys in 41 locations in the United States, Latin America, Europe, Asia, and the Middle East. GT has been recognized for its philanthropic giving, diversity, and innovation, and is consistently among the largest firms in the U.S. on the Law360 400 and among the Top 20 on the Am Law Global 100. Web: http://www.gtlaw.com Twitter: @GT_Law.