Greene Street with Envy: A Bold New Look For A Century-Old Snook 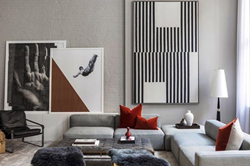 "Owning one of these lofts also means owning one of the few remaining pieces of SoHo’s architectural treasures, ” said Atit Javeri, Principal and Founder of Javeri Capital.

The building is part of the neighborhood’s SoHo Cast-Iron District, a historically protected landmark site designated by the New York City Landmark Preservation Committee in 1973. Built in the mid-18th century during an architectural renaissance, this building is not only the earliest cast-iron building on Greene Street, it is part of the world’s largest collection of preserved cast iron commercial and residential buildings. The five-story property, originally built in 1869, was acquired by Javeri Capital for $14.45M in 2014 and was later approved by the Landmark Preservation Committee for residential conversion and restoration, as well as the construction of one additional story plus mezzanine.

“SoHo’s rich and vibrant history is partly what makes it the most desirable neighborhood in the world. We are proud to have painstakingly restored 10 Greene Street to its original stature and to deliver luxurious interior finishes befitting such a historic gem. It is rare to be able to offer this combination of such history and luxury. Owning one of these lofts also means owning one of the few remaining pieces of SoHo’s architectural treasures ” said Atit Javeri, Principal and Founder of Javeri Capital.

“Our design here challenges the norm,” said Cheryl Eisen, Founder & President of Interior Marketing Group, “we are re-inventing the term staging and creating interiors that are far from bland using modern art, custom furnishings, and unique accents for authenticity.”

Located one Greene street in the heart of SoHo, residents will have easy access to the area’s highly sought after restaurants, designer shops, and picturesque cobblestone streets. Following a lavish launch party- which will be featured on Bravo TV’s Million Dollar Listing New York- the 2nd, 3rd, and 4th-floor listings are available for immediate occupancy at prices ranging from $5.65- $5.995M. The duplex penthouse will be released late March.

About Interior Marketing Group
Interior Marketing Group is the largest luxury real estate design and marketing firm in the United States. In addition to providing interior design services to luxury homeowners, IMG’s award-winning staging and interior marketing services enable the most coveted properties and developments in the world to sell faster and at greater multiples than the market's average. IMG is regularly featured in publications including Forbes, The New York Times, The Wall Street Journal, Architectural Digest, Interior Design Magazine, Inc. Magazine, Robb Report, Vogue, and on major television networks including BravoTV, NBC, CBS, and Fox.

About Javeri Capital
Javeri Capital is a family owned and controlled real estate investment firm with years of experience in the industry. Javeri Capital acquires, develops, and manages real estate on behalf of its principals and outside investors, with an emphasis on commercial and residential properties in New York and the major metropolitan Northeast that may be underperforming, but offer potential value enhancement through redevelopment and/or repositioning. Javeri Capital has a substantial track record of value-add investments in Lower Manhattan, dating to 2002, when the firm's principals acquired two assets at 23-25 and 32-34 Greene Street, with 23-25 Greene Street remaining in the portfolio today. Since 2011, Javeri Capital has executed over $100 million in transactions, focused on value-add development and redevelopment opportunities and retail condominiums in Soho.