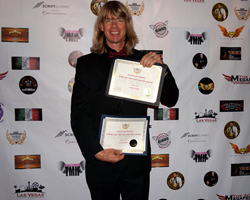 It was a great experience to see so many familiar faces from the entertainment industry at the Megafest! I hope that people who watch my show will be inspired to appreciate and cherish for years to come their special memories created with their loved ones.

Gregory Graham is the creator, writer, host, director, and producer of the show UNFORGETTABLE MEMORIES. His director of photography is the Emmy award winning TV Host Phil Moore, who is also a series producer, segment, story, and web producer, as well as a writer of TV shows, entertainment news, and games.

Gregory received 2 awards for UNFORGETTABLE MEMORIES at the Newsfest, which is one of the film festivals included in the 2019 Megafest in Las Vegas. His show's trailer won Best Short Short Documentary News and 2nd place for Best Short Documentary News. This program covers issues critical to people who have to deal with the loss of a loved one, such as stress, real estate problems related to probate, and ways in which to overcome personal challenges related to grief.

Synopsis of UNFORGETTABLE MEMORIES: After discovering that his mother had been diagnosed with Alzheimer's disease, director/producer/screenwriter/actor/host Gregory Graham created and hosted UNFORGETTABLE MEMORIES, a show devoted to celebrating life and precious time that is spent with loved ones. Gregory is very happy to have dedicated this project to his mother's memory, especially now that she has passed away. This entertaining and interesting show was shot at a film studio in Los Angeles, just down the street from E! Entertainment Studios.

These 2 film festival wins at NewsFest contribute to the tally of almost 30 film festival award nominations and wins for various film and television projects that Gregory has hosted or acted in over the past years. Several of his self-produced films and shows have been broadcasted on local Los Angeles public access channels and have been seen in theaters at various film festivals, both nationally and internationally.

Among other projects, Gregory created, wrote, directed, and starred in the award-winning web series THE PSYCHOLOGIST. He has also written several award-winning screenplays. His TV program, HEAVY METAL GREG, has entertained many audiences at home on TV as well as at film festivals. In this show, he interviewed celebrities as well as people in the music and entertainment industry. You can find his acting and hosting credits on IMDb at https://www.imdb.com/name/nm1782570/.

“I am very pleased with how well UNFORGETTABLE MEMORIES did at Newsfest Film Festival. It was a great experience to see so many familiar faces from the entertainment industry at the Megafest! I hope that people who watch my show will be inspired to appreciate and cherish for years to come their special memories created with their loved ones,” shared Gregory.

Gregory Graham has a B.S. degree in Industrial Engineering from Iowa State University, is an Eagle Scout, a member of the High IQ Society MENSA, and an award-winning actor/host/screenwriter/director/producer. He is also a real estate broker and a mortgage officer in the Los Angeles area. Gregory studied acting, hosting, directing, and producing for many years in Iowa and in Los Angeles. In 2000, he attended the Donna Reed Festival for the Performing Arts where he caught the acting bug, and soon enrolled in acting classes under Emmy award winning director Joan Darling. He has been acting and working in the entertainment industry for about 20 years. Gregory has studied at Second City Improv Studio, LA Connection, Margie Haber Studio, Kimberly Jentzen's Acting with Impact School, Marki Costello's TV Hosting Academy, and at many other acting schools. He has been married to professor/researcher/actor/host/director/producer Luciana Lagana since 2003. Gregory has 70 IMDb acting credits and has worked on films and TV series such as CSI MIAMI, ROBBERY HOMICIDE DIVISION, and TRUST ME.