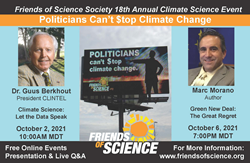 Greta Thunberg excoriated world politicians for climate blah blah blah and not responding to what she claims is a climate emergency, but Friends of Science Society’s upcoming event confirms that “Politicians Can’t Stop Climate Change” and Greta’s blah blah blah is misinformed.

As reported in The Guardian of Sept. 28, 2021, Greta Thunberg excoriated world politicians for climate blah blah blah and not responding to what she claims is a climate emergency, but Friends of Science Society’s upcoming event confirms that “Politicians Can’t Stop Climate Change” and Greta’s blah blah blah is misinformed.

Dr. Guus Berkhout, president of CLINTEL, the climate intelligence organization of over 900 signatory scientists and scholars who say there is no climate emergency, will present “Climate Science: Let the Data Speak” on Oct. 2, 2021, at 10 a.m. MDT as part one of Friends of Science Society’s 18th Annual Free Event online. Live stream link.

Marc Morano, author, and climate realist activist will counter many of Greta’s claims to phase out fossil fuels ‘immediately’ in his presentation “Green New Deal: The Great Regret”, part two of Friends of Science online event on Oct. 6, 2021, at 7 p.m. MDT. Live stream link. Marc offers the public an entertaining exposé of climate hypocrisy and the muddled messages from climate catastrophe reporters. But his presentation further warns the public of the dangers of COVID lockdown becoming the method of choice for climate fanatics intent on reducing emissions. Live Q&A will follow both presentations.

As Dr. Berkhout and colleagues show in the CLINTEL World Climate Declaration, ‘the science’ reveals there is no climate emergency, therefore there is no need to turn world energy systems upside down or strive for NetZero2050 targets.

People may wonder why the climate emergency is over, when governments around the world have embraced this theme for a few years, says Friends of Science.

The reason is found in peer-reviewed research by Roger Pielke, Jr., and Justin Ritchie, who found that ‘the science’ of climate emergency is all based on an implausible scenario known as RCP 8.5* and outdated science premises. (*Representative Concentration Pathways – 4 scenarios developed for climate research, not meant to be used for climate policy making.)

As Pielke, Jr. explains in a post entitled “The Unstoppable Momentum of Outdated Science”, this type of repetitive research error has occurred in medical research on breast cancer as well, where thousands of scientific papers were published, all based erroneously on a skin cancer cell-line.

It should be a great relief to people around the world that without reference to the RCP 8.5 scenario, there is no climate emergency and we do have time for a more thoughtful implementation of new energy technologies, says Friends of Science.

Furthermore, taxpayers will be relieved that the upcoming COP26 in Glasgow seems likely to fall apart, largely because of the attempted extortion of trillions of dollars from Western OECD nations by developing nations. Originally promised a $100/bn a year Green Climate Fund to be drawn from OECD nations as a bribe to get on board the Paris Agreement, the financial appetites of emerging nations have grown exponentially. As Canadian energy economist Robert Lyman explains in “COP26 Climate Conference in Glasgow – Show Me the Money!” Americans may be held hostage for a proposed $80 billion a year for green climate funding – a far cry from the April 2021 commitment by U.S. President Biden to increase climate aid to $5.7 billion annually by 2024!

As Friends of Science Society has always said, open, civil debate and full cost benefit analysis of climate and energy policies are essential for good public policy. Recent peer reviewed science shows that climate models overstate atmospheric warming, and the UN IPCC’s method of attributing warming to greenhouse gases is flawed, thus carbon dioxide’s warming effect on climate is no longer seen to present any imminent existential threat, consequently we do have time.